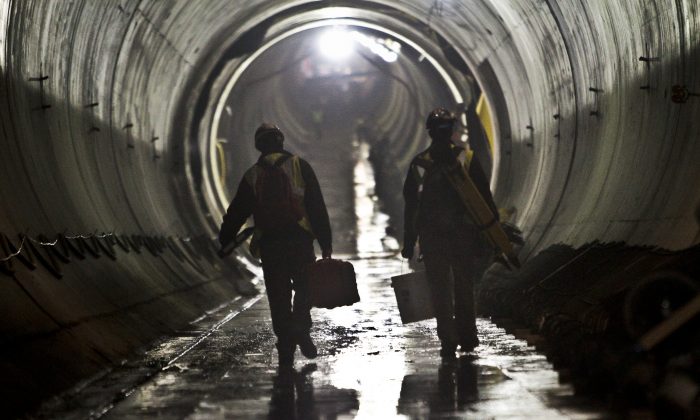 In this May 2, 2014, file photo, construction workers walk between the 72nd Street and 86th Street section of the Second Avenue subway tunnel in New York. (AP Photo/Bebeto Matthews)
New York

NEW YORK—A deal has finally been struck to fund the New York City region’s mass transit capital spending program, ensuring that vitally needed infrastructure upgrades — including repairs to damage wrought by Superstorm Sandy — will be underwritten for the next five years.

The $26.1 billion agreement to fund the Metropolitan Transportation Authority was jointly announced Saturday by Gov. Andrew Cuomo and Mayor Bill de Blasio, who had spent weeks sniping at each other about the city’s contribution as the Oct. 28 deadline to adopt the plan loomed.

In the end, the city upped its offer late this week to $2.5 billion. The state is contributing $8.3 billion and the rest is made up of pre-existing dedicated revenue streams.

Both men released statements stressing the importance of the MTA — de Blasio called it “the backbone” of the region’s economy, while Cuomo opted for “the lifeblood of New York” — and praising the deal, which features the city’s largest contribution to the capital fund.

The warm words stand in sharp contrast to the men’s bickering in recent weeks as the fate of the MTA program became the latest front in the ongoing battle between two Democrats who once considered themselves friends.

When de Blasio repeatedly accused the state of tapping into the capital fund for other needs, Cuomo called his concern “a joke” and, while noting that the majority of MTA riders are city residents, implored the city “to do its fair share.” He originally asked the city for $3.2 billion; City Hall initially offered $627 million.

The negotiations remained tense and included calls between de Blasio and Cuomo, a rarity in recent months as their feud has intensified. But negotiations between Emma Wolfe, the mayor’s top political aide, and Melissa DeRosa, a senior aide to the governor, helped bring the deal across the finish line.

Both the city and state have vowed to fulfill obligations and divert any of the committed money to other projects.

What to Know About your Next NYC Rental

The aging system, which opened in 1904, has struggled to keep up with the pace of booming ridership and faces substantial repairs after saltwater flooded parts of the system during Superstorm Sandy three years ago.

The MTA board is slated to meet on October 28 to approve a capital plan, and new projects wouldn’t have been approved without the funding agreement. The delay in reaching a funding deal, which worried some municipal bond investors, already has slowed plans and imperiled some massive projects like the next phase of the 2nd Avenue subway line and the construction of a Long Island Rail Road station under Grand Central Terminal.

Those projects should now continue. A spokesman for the MTA said that fares would not rise as a result of this deal but, as previously planned, would go up 4 percent in both 2017 and 2019 to match inflation.