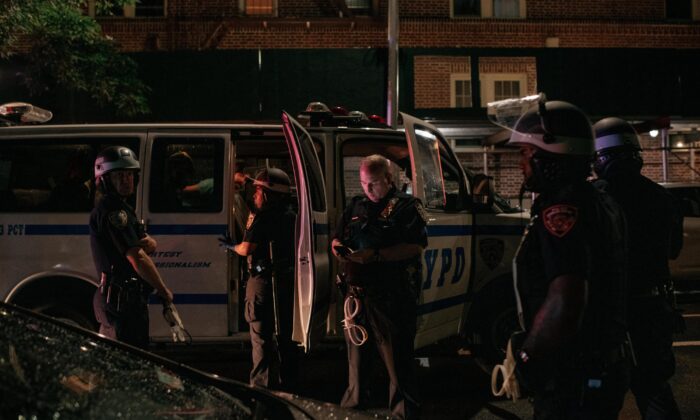 Compared to the same period last year, shootings are up more than 140 percent, and more than 150 percent in the past four weeks.

The city hasn’t seen such levels of violence since the mid-1990s. From June until Aug. 16, 729 people were shot, compared to 272 in the same period last year. Homicides are up more than 30 percent this year.

The NYPD has blamed the crime on a series of policies that have complicated their work.

Last year’s bail reform measures banned judges from requiring cash bail for most nonviolent and some lower-level violent crimes, resulting in criminals getting quickly back on the street after arrests.

Starting in May, protests sparked by the death of George Floyd during his arrest in Minneapolis turned violent and fueled resentment toward police. In July, police use-of-force restrictions kicked in, outlawing, among other things, officers accidentally pressing their knee against a suspect’s back or chest during an arrest.

Police officers and other experts have criticized the law for criminalizing martial arts techniques routinely used by police to safely subdue resisting subjects. They warned it will lead police to use more severe methods, such as tasers, or avoid arrests.

Some NYPD officers told The Epoch Times on the condition of anonymity that officers are indeed hesitant to arrest resisting suspects, unless they pose a present danger to the officers or the public.

Only a small portion of people released due to the bail reform have been involved in shootings, The New York Post reported. But the officers cited the reform as a major demoralizing factor, since it makes their efforts seem pointless.

Police have also been retiring at a faster pace, said Sgt. Jessica McRorie, an NYPD spokeswoman.

“While the decision to retire is a personal one and can be attributed to a range of factors, it is a troubling trend that we are closely monitoring,” McRorie told The Epoch Times in an emailed statement.

Mayor Bill de Blasio blamed the violence on the economic impact of the pandemic lockdowns as well as the slowdown of the court system. The Office of Court Administration rejected blame, saying much of the court proceedings have continued virtually, the New York Daily News reported.