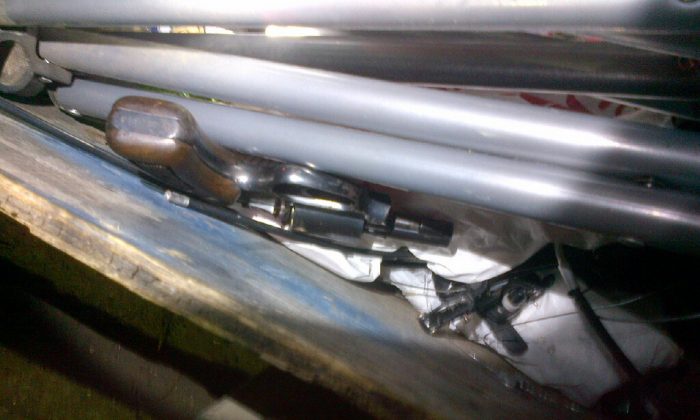 A Rossi .38 revolver used to shoot police officer John Hirschberger in the leg, in Brooklyn, N.Y., on Sunday, Aug. 31, 2014. (NYPD)
Crime and Incidents

Although NYPD statistics show the massive outbreak of gun violence since April is finally dwindling, one man was shot dead in the Bronx this weekend and two police officers were injured during violent encounters.

Responding to a 911 call, shortly after midnight Saturday, police found a 23-year-old man with several shots in his torso and leg at the corner of Wickham Avenue and Tillotson Avenue in the Bronx. He was later pronounced dead at Jacobi Hospital.

On Sunday around 2:30 a.m. police officer John Hirschberger, 28, and his partner were patrolling Marcus Garvey Blvd and Gates Avenue in Brooklyn when a 22-year-old black male fleeing from three plain-clothes policemen, drew a small Rossi .38 revolver and shot Hirschberger in the thigh.

The three plain-clothes policemen had been in pursuit of the shooter when they discovered him adjusting his waistband—signaling a possible concealed gun.

The officers returned fire hitting him once in the back, a police release states. Both wounded men were taken to Kings County Hospital. The suspect was in stable condition, while Hirschberger was treated for a graze wound and released.

In another incident, a police officer was attacked while stopped at a Grand Concourse bodega in the Bronx before reporting for work. A 32 year-old man and two teens surrounded him and started to assault him, a police release states.

Although the cop identified himself, the trio didn’t stop their assault. After struggling over his gun, the officer fell to the ground with the older man. One of the teens took the gun and ran away.

While the officer fought the remaining two men, somebody called 911. Additional police arrived and arrested Trone Selby, 32, and Adrian Medina, 17, both from the Bronx.

The third assailant, 15 years old, was arrested shortly after, in possession of the officer’s gun.

The officer was treated for a swollen eye and abrasions to his arm, neck, and head.

Medina was charged with 2nd degree robbery and criminal possession of marijuana.

Charges for the 15-year-old were pending.