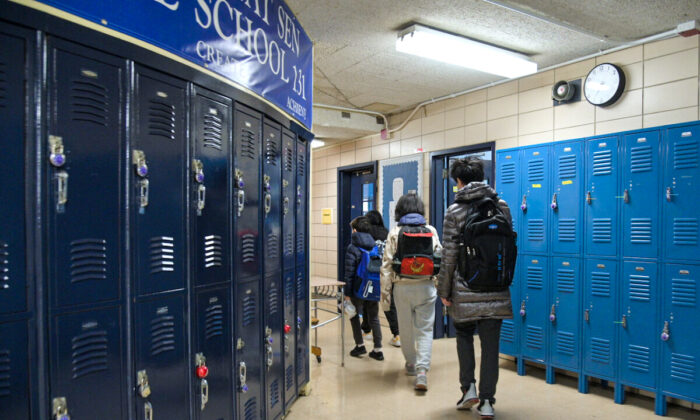 Students file into their classroom in a file photo. (Michael Loccisano/Getty Images)
AMERICA

Public school students in New York City will be met with increased COVID-19 testing when they return from winter break, according to the city’s new plan.

Under the plan released on Tuesday at a press conference with outgoing Mayor Bill de Blasio and Mayor-elect Eric Adams, the return to school for the city’s more than 938,000 students will take place on Jan. 3 as originally scheduled. There will be a new test-to-return policy for students who share a classroom with someone who has tested positive for COVID-19.

When one student tests positive for COVID-19, every other student in the class will be sent home with a rapid testing kit for two tests over seven days, according to de Blasio. A student who tests negative on the first test and does not demonstrate COVID-19 symptoms will be able to return to school the following day, instead of being placed in quarantine at home for 10 days as per old policies.

“This guarantees more consistency in their education, it guarantees fewer disruptions,” said de Blasio, who is set to be replaced by Adams on Jan. 1.

“We’re going to double the amount of testing we do in schools,” he said, adding that the city will continue to encourage parents to sign consent forms so that their children can participate in random testings at school. “These are the things we’re going to do to keep everyone safe.”

The mayor also pointed to data from health officials showing that 98 percent of students who have had close contact with an infected classmate do not contract the virus.

De Blasio and Adams were joined by New York Gov. Kathy Hochul, who announced that a total of 2 million rapid test kits, including 1 million sent by the state, will be available to New York City’s schools by the end of this week.

“We saw the failed experiment with remote teaching and the parents who were just pulling their hair out at kitchen tables,” Hochul said, referring to the 18-month school closure spanning from March 2020 through September 2021.

The move comes after New York City’s powerful teachers’ union indicated that it would try to block a Jan. 3 opening of school buildings if the incoming Adams administration did not expand the scale of testing.

“Our testing system that we have is now broken,” Michael Mulgrew, president of the 94,000 member-strong United Federation of Teachers, said in an interview with NY1 last week.

“I’m working with the Adams administration. We’ll work through this entire break. But if we don’t see we’re getting the testing system, we know we need to keep our schools and communities and children safe, then we’re going to have to take a different position on this whole ‘schools have to remain open’ [policy],” the president said.