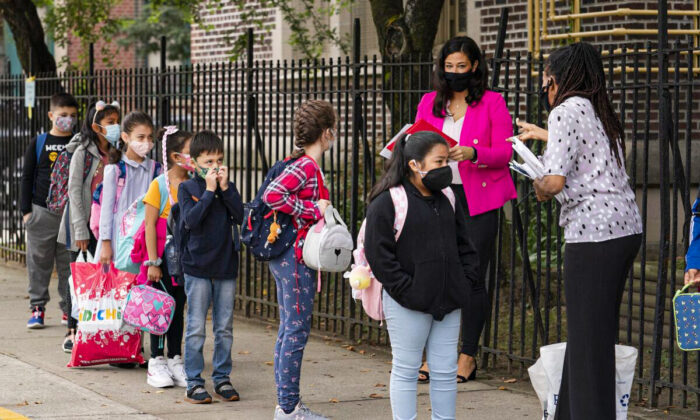 Teachers line up their students before entering PS 179 elementary school in the Kensington neighborhood, in the Brooklyn borough of New York, on Sept. 29, 2020. (Mark Lennihan/AP Photo)
US News

NEW YORK—New York City public school students will be allowed to remove their masks outside starting next week but must keep them on indoors for now, Schools Chancellor David Banks said Friday.

“I am so pleased that we are able to make this exciting announcement and safely allow students and staff to remove their masks when outdoors at NYC public schools,” Banks said in a news release.

The move comes as COVID-19 infections in New York continue to decline after the emergence of the Omicron variant fueled a December-January spike.

Mayor Eric Adams hailed the revised mask rules in several TV and radio appearances Friday but gave no target date for lifting the indoor mask mandate in schools. “Eventually we’re going to move to the place to ease up on many of these mandates so we can get back to a level of normality that we are looking for,” Adams said on WPIX.

New York Gov. Kathy Hochul said earlier this month that she would revisit the issue of school mask rules in the first week of March.

Students in New York City and much of the rest of the state will return to the classroom on Monday after a weeklong break.