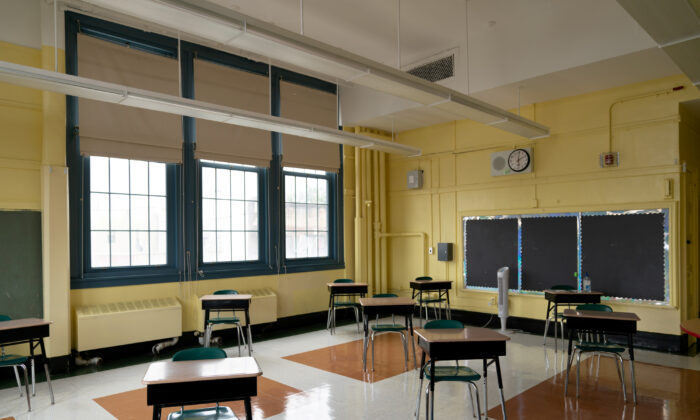 Students' desk adhere to social distancing requirements in a classroom during a news conference at New Bridges Elementary School, ahead of schools reopening, in the Brooklyn borough of New York City, on Aug. 19, 2020. (Jeenah Moon/Reuters)
NY News

A potential staffing crisis at the nation’s largest public school system looms as New York City’s COVID-19 vaccine mandate for all public school employees threatens to bar thousands of teacher and staff from classrooms when it takes effect next week.

While Mayor Bill de Blasio seeks to keep as many schools as possible open for in-person learning, adults working at those schools remain under strict vaccination policies. With limited exceptions, all employees and contractors of the New York City Department of Education and have until the end of the day on Sept. 27 to show proof of at least the first dose of the COVID-19 vaccine.

Around 87 percent of the city’s 87,000 public school teachers are in compliance with the vaccination requirement, according to the most recent update from the department. That translates to more than 10,000 teachers who might be removed from payroll next Tuesday if they remain unvaccinated without a medical or religious exemption.

When asked about the potential staff shortage, de Blasio said Thursday at a press briefing that the city is “ready to redeploy resources.”

“We have thousands and thousands of vaccinated experienced substitute teachers ready to go,” the mayor said. “That’s the obvious first go-to, but it’s also true that central staff has thousands of educators, certified educators, who could step into different roles if needed. So, they’ll be ready.”

“The reality we’re seeing right now is we think the overwhelming majority of our educators and staff are going to be there on Monday having gotten that first dose and moving forward,” he added.

Despite the assurance, the Council of School Supervisors & Administrators (CSA) is calling on the city to delay the deadline, so that its members have more time to plan for possible staffing changes.

“Any staffing shortage, especially during a pandemic, is a threat to the health and safety of both students and personnel,” said CSA President Mark Cannizzaro in a statement. “It is dangerous and irresponsible for the city to move forward with its plan to allow schools and centers to operate so severely understaffed. As a result, we are calling on the city to delay the deadline for the mandate to allow the city to develop a reasonable contingency plan.”

The United Federation of Teachers (UFT) issued a short statement afterwards agreeing with the CSA.

“The principals’ union is right—our schools are not ready for the implementation of the vaccine mandate,” said UFT President Michael Mulgrew. “I hope for once City Hall is listening to its own school leaders and finally starts to put together a reasonable plan to face the challenge of keeping our children safe.”