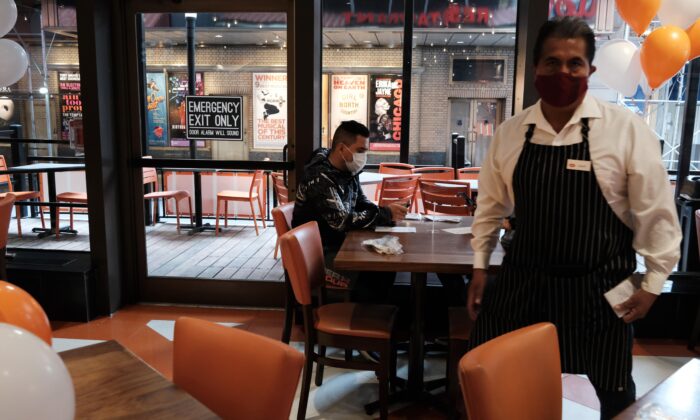 New Yorkers lacking COVID-19 vaccination will still be allowed to pick up food at restaurants for takeout and use outdoor seating despite new rules barring them from entering restaurants, gyms, and entertainment venues, according to a rule guide released by the city government.

The rules go into effect on Aug. 17, requiring the targeted businesses to demand proof of at least one vaccination dose from both staff and anybody entering their establishment over the age of 12. It exempts “individuals entering for a quick and limited purpose (for example, using the restroom, placing or picking up an order or service, changing clothes in a locker room, or performing necessary repairs),” according to the Emergency Executive Order signed by Mayor Bill de Blasio and released on Aug. 16 (pdf).

The city website specifies that the exemption applies to matters that take “a small amount of time (e.g. less than 10 minutes).”

People entering under the exemption “must wear a face mask whenever they are unable to maintain six feet of social distance from other people,” says an FAQ sheet released by the city (pdf).

Enforcement of the rules will start on Sept. 13. Establishments will face fines of $1,000 for a first violation and possibly higher fines and other penalties for subsequent ones. Acceptable documents include vaccination cards issued by the Centers for Disease Control and Prevention (CDC) or an official vaccination record. For the CDC cards or records issued by another country, a photo of the document suffices. A vaccination record on a city or state official app would also pass.

Outdoor seating is exempt from the rule, including in “structures on a sidewalk or roadway and entirely open on the side facing the sidewalk” as well as those “designed for individual parties (such as plastic domes) so long as the dome has adequate ventilation to allow for air circulation.” Structures without a roof or with less than three walls are exempt too.

Unvaccinated children under 12 can enter only with a mask.

Establishments located at PreK-12 schools, senior centers, and childcare programs are exempt, just as those in residential and office buildings only available to residents or staff.

Professional athletes and performers from out of town coming to play or perform are exempt and so is their entourage.

The rules have raised concerns among some business owners about how they are supposed to be enforced and whether they will discourage sorely needed customers.

The pace of vaccinating has recently picked up in the city, but more than a third of New Yorkers haven’t received the shot. In the Bronx and Brooklyn, nearly half haven’t. The rates are the lowest among black residents, of whom nearly two-thirds haven’t received the shot. About half of whites and Hispanics got at least one shot as well as nearly 80 percent of Asians.

The city promised a webinar on “best practices for de-escalating disputes between customers and businesses” by Aug. 20, 2021. Businesses won’t be required to verify whether the vaccination documents are genuine, but the city encouraged them to report suspected fakes.

The targeted businesses have been among the most damaged by the shutdowns imposed by the government in response to the pandemic.

Most restaurants saw December 2020 sales down 50 to 100 percent from the year before, according to a survey by the NYC Hospitality Alliance, an industry group.