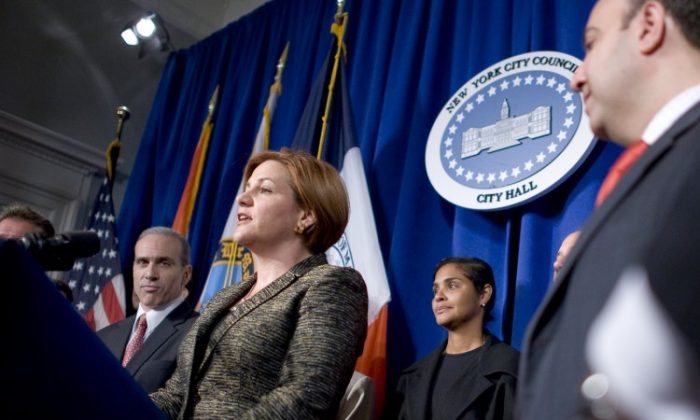 Jeremy Lyman, co-founder of Birch Coffee, a small business in the Flatiron District of Manhattan, in his coffee house Tuesday. (Benjamin Chasteen/The Epoch Times)
US

NEW YORK—Small-business owners fed up with fines and fees from multiple city agencies can look forward to five new measures from the City Council that should ease the process through outreach, education, and a regulatory overhaul.

Several small-business owners gathered alongside council members and small-business advocates to show support for the measures, which include removing obsolete regulations, issuing warnings first instead of immediate fines, standardizing customer service training for inspectors, and providing an agency liaison to industry groups.

“The city agencies have a valuable role to play in regulating business,” Councilwoman Gale Brewer said from City Hall Tuesday.

“But we must be sure that the laws are clear, enforced fairly and uniformly, and interactions between government and businesses are professional, courteous, and respectful.”

Small-business owner Farid Lancheros said, “I believe I can do much more with the assistance of government rather than being hindered by the regulations.”

He said three years ago he was fined $100 for having a chalkboard opened in the A position instead of closed leaning up against the store front, a regulation he had no idea was on the books and was only enforceable on Sundays.

City Council Speaker Christine Quinn hopes these new measures will allow business owners the time to take corrective action before being fined for regulations that are not an immediate threat to public safety.

Rob Bookman of the New York City Hospitality Alliance has seen a spike in the number of fines in the last 10 years and hopes the new measures will bring the focus back to compliance.

Bookman said that when he worked at the Department of Consumer Affairs years ago, it was considered a victory if a business complied with the regulations. “Today, it is about how much money we are bringing in. That attitude has to change,” Bookman said.

Bookman believes getting the old obsolete regulations off the books will open a way for the agencies to issue fines.

If the new initiative is passed, each city agency will review the laws on their books and report back to council, suggesting which laws could be removed. Speaker Quinn said the council will then work diligently to get them removed through legislation. Quinn said she does not anticipate anything to take effect until next year.

“If you have [a regulation] on the books, it can get enforced,” Quinn said. “The laws and regulations of the city of New York matter and if they are out of date, or are found to have been wrong, they need to be taken off.”

The speakers at the press conference painted a grim picture of business owners being crushed by regulations, but not all small businesses find the city’s regulations hinder growth.

After three years in business, Birch Coffee, located on 27th Street in the Flatiron District, is thriving. The owners plan to open a second location at 96th Street and Columbus Avenue by the end of the year.

The bustling coffeehouse and cafe is not under fewer or different regulations than other businesses, but owners Jeremy Lyman and Paul Schlader take the challenges in stride with a positive attitude.

“Starting your own business, taking that risk, has to be a struggle. If it wasn’t a struggle, everybody would do it,” Lyman said.

Lyman said they experienced regulatory frustration during the building process, with two different inspectors telling them two different things, delaying construction while the issue was sorted.

“It doesn’t matter where you are. You are going to have to go through bureaucratic red tape regardless,” Schlader said.

While both men welcomed any changes to ease the process and avoid future problems, Lyman doesn’t believe any process can be seamless, because, he said, you are relying on human beings to interpret the laws.

“We are all imperfect. I think everyone is doing the best they can, but everyone has different opinions,” Lyman said. “I have to assume nobody else will change. I am the one who has to change. That is what I have learned through this process and it has been great.”