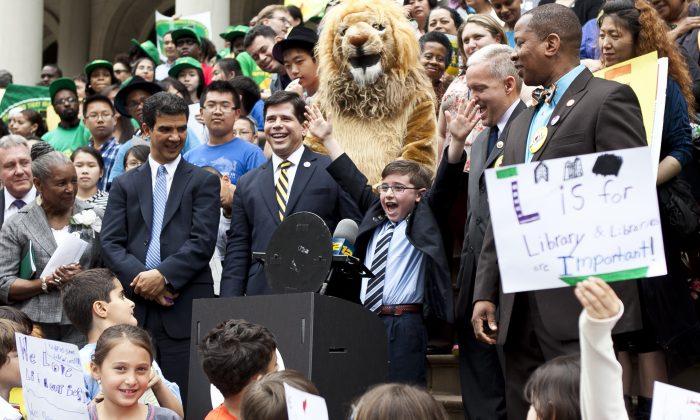 NEW YORK—Sporting a blue blazer, glasses, and standing at a mini-podium, third-grader Preston Ferraiuolo from Brooklyn called out confidently to the crowd of 300 adults: “Hello New York City!”

Preston was one of about two dozen children who joined a press conference and rally on the steps of City Hall to protest $106.7 million in budget cuts to public libraries.

“They give us a library card no matter what our age is,” he enthusiastically told the crowd. “Libraries cannot be taken for granted!”

Led by Council member Jimmy Van Bramer, chair of the City Council’s Cultural Affairs, Libraries and International Group Relations Committee, the rally was packed with the heads of the New York, Queens, and Brooklyn libraries, and numerous City Council members.

Immediately after the rally, Van Bramer introduced a bill to the City Council to get the money reinstated. His promise to stop the impending cuts was echoed by others.

Tony Marx, president and CEO of New York Public Libraries said that they will get the money restored. “Then we are going to build from there.”

The three library heads have been appearing jointly a lot recently. At a March hearing on the city’s preliminary budget, they cited a January 2013 study by the Center for an Urban Future that explored the impact and engagement of public libraries.

At the rally, amid signs held by a group of school children with slogans like “L is for Library and Libraries are Important,” Council member Margaret Chin added her voice to the mix.

“Libraries are great for our kids, but also for our seniors and other community members,” said Chin. “We have to save them.”