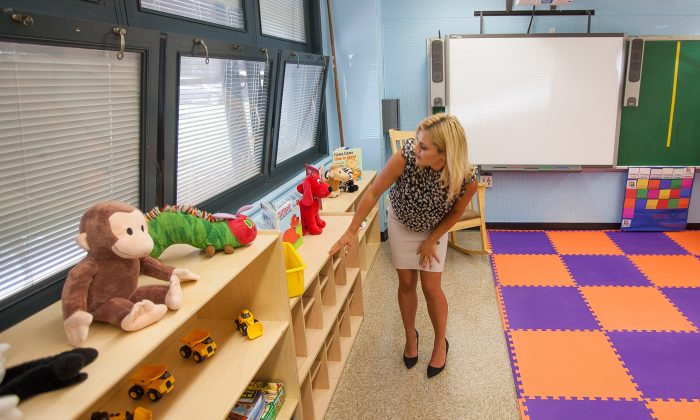 NEW YORK—A week before schools open their doors, the city’s newly expanded prekindergarten classes are still not all booked, but close enough for Mayor Bill de Blasio to announce the preliminary enrollment number—50,407.

As a major part of his campaign, de Blasio promised 53,000 full-day pre-K seats this September, an increase from approximately 20,000 full day and about 26,000 half-day spots last year.

In the past months though, the mayor had cut the number down to 50,000 in his public speeches.

On a scorching Thursday afternoon in Brooklyn’s Vinegar Hill, surrounded by supportive council members and top staff of his administration, he confirmed the capacity has been indeed increased to 53,000 so there are still seats left. He encouraged parents of four-year-olds to use the opportunity.

De Blasio was asked extensively about a Wednesday press release held by City Comptroller Scott Stringer that said 70 percent of some 500 Education Department pre-K contracts had not yet been submitted to Stringer for an approval.

Among those that have, about half the contracts had issues. Some of the issues have since been resolved, the release stated.

The city contracted with hundreds of community organizations to provide over 30,000 pre-K seats this year.

The mayor said it’s common for the city to take a long time approving its contracts though it’s something he’d like to improve upon.

“The prior contracting process has always been very onerous and very lengthy and [had] a lot of delays for a variety of reasons,” said Gladys Carrión, commissioner of the Administration for Children’s Services (ACS).
She said that last year the contracts took even longer to approve.

About half of the pre-K contracts have now been submitted, including over 100 managed by the ACS, as Stringer didn’t include the ACS contracts in his numbers, de Blasio said.

Deputy Mayor Richard Buery said at a different Thursday event that the city offers loans to entities waiting for an approval of their contracts with the city, and so the pre-K providers still get paid for the services, even if their contracts are pending.

Stringer responded Thursday saying that he wants to handle contract approvals differently than his predecessor, reviewing them before they are supposed to come into effect.

The comptroller raised a case of a pre-K provider’s employee charged in the past for conspiring to commit child pornography. The city officials said the employee was fired immediately after the fact was discovered.

Another vendor had six violations for failing to have staff screened for child abuse through the state register.

“The Administration has since been able to provide documentation to prove that those problems were addressed,” Stringer said in a release.

Department of Investigation Commissioner Mark G. Peters said there has been one instance where a pre-K provider was shut down due to a pattern of problems with paperwork.

Five providers still have health violations that need to be immediately fixed, down from 12 last week, the officials said.

De Blasio acknowledged that the providers may have to delay their opening or even close down if the issues can’t be fixed in a day or two.

Affected families would be contacted and offered another spot.

De Blasio said the safety of the programs is ensured by different city agencies, like the health and fire departments, not by the comptroller’s review of the contracts.

Stringer said the contract approval is not just a matter of paperwork, since his office is the only independent reviewer of the integrity of the providers. He acknowledged the work of city agencies, but pointed out that “they all work for the mayor.”