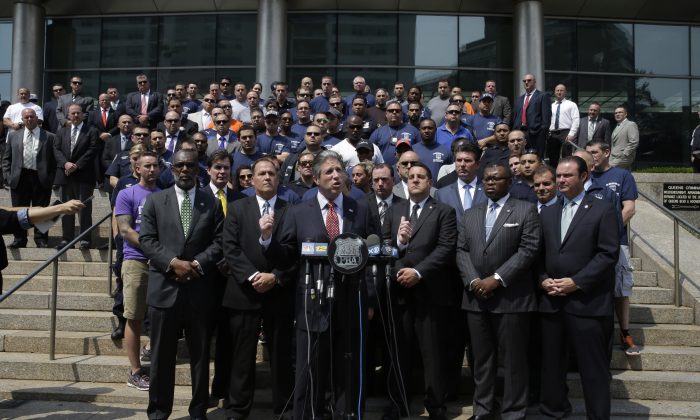 After Mayor Bill de Blasio’s announcement of a vaccine mandate for city workers, police union heads say they will take legal actions to oppose the mandate and protect the rights of their employees.

On Wednesday, de Blasio said any city worker who is not vaccinated with at least the first dose of the vaccine by 5 p.m. on Oct. 29 will be put on unpaid leave, prompting police unions to fight back.

Police Benevolent Association President Patrick J. Lynch said in a statement Thursday that his organization will go to court to protect his employees’ right to make their own medical decisions.

“From the beginning of the de Blasio administration’s haphazard vaccine rollout, we have fought to make the vaccine available to every member who chooses it, while also protecting their right to make that personal medical decision in consultation with their own doctor. Now that the city has moved to unilaterally impose a mandate, we will proceed with legal action to protect our members’ rights,” said Lynch.

Meanwhile, de Blasio said the mandate is a way out of the pandemic after having tried various financial incentives to get all workers vaccinated.

Detectives Endowment Association President Paul DiGiacomo told a local Fox News station on Wednesday that about 70 percent of his workforce is vaccinated and some have antibodies from recovering from the virus, and that his organization will also take legal action to protect those who do not want to get the vaccine.

“We will go into court to fight for their rights, and we will go into the Office of Collective Bargaining to try and negotiate some sort of settlement. But there are some people in this organization that are very against this vaccine, and we have to protect those rights, as well as the rights of the people that want the vaccine,” said DiGiacomo.

One of New York state’s congressional delegates Rep. Elise Stefanik (R-N.Y.), chairwoman of the House Republican Conference, told Fox News on Friday that the decision by de Blasio is going to have a negative impact on the already escalating crime rate.

“It’s just another example of New York City spiraling out of control with the failed leadership from Mayor de Blasio, particularly after two years when we’ve seen skyrocketing crime numbers in New York City, the fact that he’s instituting this mandate for law enforcement officers, … for city workers, it’s going to have a hugely negative impact both on the way of life in New York City but also on the safety and security in New York City,” said Stefanik.

Mayor de Blasio said Thursday that the mandate has been set and he hopes police officers will comply with the safety measure.

“We are requiring them to get the vaccine, and we’re saying get vaccinated or you go on leave without pay. And I hope no one ends up on leave without pay, but I think that’s a pretty clear line in the sand,” de Blasio said at a Thursday press briefing.

“What I tell my patients is the bottom line is that 98 percent of the people that have been in the hospital have been unvaccinated compared to only 2 percent having been vaccinated. And we know from the CDC that if you get vaccinated, you now have 11-fold protection from dying from COVID,” said Long.

When asked if the city was prepared for a shortage of first responders, the mayor said there are plans in place to deal with that event.

“But we have contingency plans in place using overtime and using other capacities to make sure we can keep the service going. And that’s what we prepared for, and we feel confident in those plans,” de Blasio told reporters.