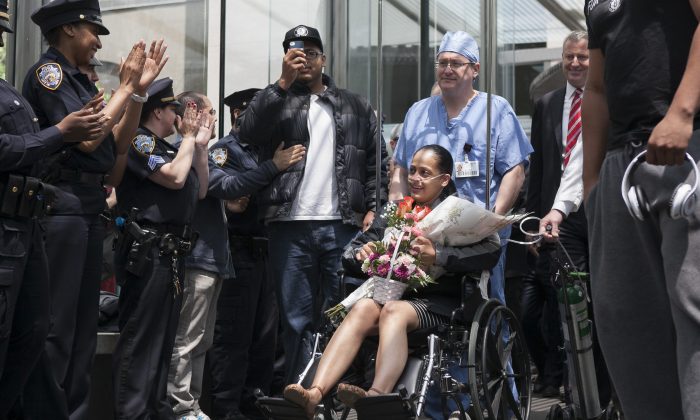 New York City police officer Rosa Rodriguez leaves the Weill Cornell Medical Center in Manhattan, New York on May 19, 2014, after recovering from a critical injury she suffered while responding to an apartment building fire. The city's police union is urging the City Council to support a state bill that would increase pensions for officers permanently injured while on duty. (Samira Bouaou/Epoch Times)
New York

The police union is unhappy about the City Council again.

On Tuesday, the association sent out a press release complaining that emails it was sending from the organization’s website to City Council members were bouncing back to the PBA’s web server.

The emails were part of the PBA’s campaign to gather public signatures on an online letter. The letter, which would get automatically sent to all 51 City Council members, urged the officials to support legislation in Albany that would allow newly hired police officers who get severely injured while on duty to receive the same pension benefits as senior police officers.

In June 2009, then-governor David Paterson vetoed a bill that would extend a more expensive pension plan to newly hired police officers. That bill was passed annually by his predecessors.

The PBA estimated newly hired officers with severe disabilities would only get about $22,000 a year in benefits under current pension provisions.

In order for the state bill to get passed, the City Council has to send a “home rule message,” or a sign of support for the legislation.

The association launched the online campaign last Thursday. More than 3,700 people sent out over 188,000 letters on the first day, according to the PBA.

“Society cannot ask police officers to risk their lives to keep the city safe and then refuse to adequately support them when they are permanently disabled in the line of duty,” PBA president Patrick Lynch said in a press release statement.