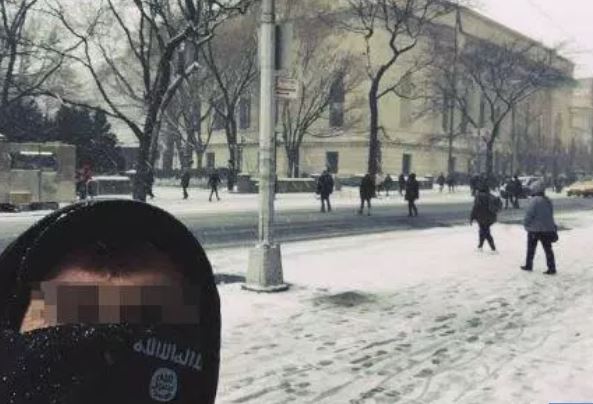 The so-called “ISIS selfies” have spurred detectives into action. The pictures not only showed men with memorabilia from the radical Islamist terrorist group, but also included the caption: “We are in your own backyard O worshippers of the cross!!”

Eric Feinberg, the co-founder of GIPEC, a cyber-intelligence firm that keeps track of terrorism-related hashtags, said the photos are meant to sow fear and could embolden potential lone wolf terrorists into taking action.

“Maybe it’s Photoshopped, maybe it’s not. It should be taken seriously,” he told the New York Post.

AN NYPD spokesman said the department is investigating the pictures.

According to the SITE intelligence group, the first picture was shared on pro-ISIS telegram channels and chat groups on Dec. 30 before spreading to Google Plus. A second image popped up several days later and was circulated widely as well.

The first picture shows a man in ISIS garb posing in front of the Metropolitan Museum of Art, part of a trio of museums that welcome over seven million visitors per year.

The second image shows a man in ISIS garb posing in front of the World Trade Center, an area that needed to be completely rebuilt after the terrorist attacks on Sept. 11, 2001.

The pictures come shortly after a would-be terrorist failed to properly detonate his bomb in the New York Penn Station, a busy commuter hub.

Ullah allegedly said he intended for it to be a suicide bombing and that he watched Internet ISIS propaganda, read extremist writings, and learned how to make bombs through online tutorials.