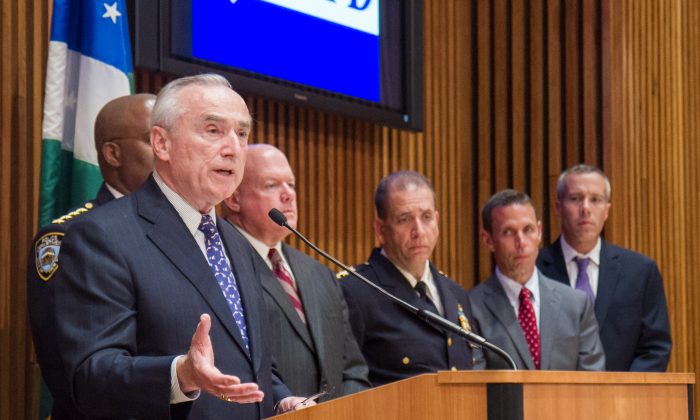 New York City police commissioner William J. Bratton is at a press conference at the NYPD headquarters in Manhattan, on June 4, 2014. Bratton testified at a City Council hearing on Monday, Sept. 8, 2014 to provide details on how he will re-train the police department in light of Eric Garner's chokehold death in July. (Benjamin Chasteen/Epoch Times)
New York

NYC Police Commissioner Bratton: Punishing Police Excessive Force Is Not Up to Us

NEW YORK—Testifying before City Council on Monday, police commissioner William Bratton stressed that a chokehold was not illegal, but simply a policy ban within the department.

When asked by Councilman Rory Lancman whether he’d support legislation that would make the chokehold illegal, Bratton responded that he would not, saying that a department policy was sufficient enough to prevent its use.

There is no law forbidding the restraining maneuver, but the department banned it in 1993 after it was deemed too dangerous for people placed in custody.

The police department recently came under scrutiny after a Staten Island resident, Eric Garner, died in July when police officers placed him in a chokehold during an attempt to arrest him for selling untaxed cigarettes.

In response to Garner’s death, the hearing on Monday was convened to discuss the details of the re-training program for all 35,000 police officers.

All officers will now be required to take a three-day course on how to deal with people who resist arrest and how to restrain them without physical harm.

The department previously did not provide any re-training after police officers left the academy, Bratton said. He also hopes to recruit an additional 1,000 officers to properly staff the new training program, among other needs.

The announcement came as a surprise, as Bratton had just rejected a City Council proposal for the hiring of additional officers back in April.

Nicholas Heyward Sr., who lost his son after police officers mistook the boy’s toy gun for a real one and shot him, protests in front of City Hall, New York, on Monday, Sept. 8, 2014. New York City police commissioner William Bratton testified at a City Council hearing on Monday to provide details on how he will re-train the police department in light of Eric Garner’s chokehold death in July. (Annie Wu/Epoch Times)

The new training program is estimated to cost between $25 million and $30 million, including paying overtime to officers who fill in while others are being trained.

Bratton said the department is also working on creating an early warning system that would track officers who get frequent complaints of excessive use of force.

In response to the public advocate Letitia James’s proposal for officers to wear body cameras, Bratton said he supports the measure, but storing the video footage would cost the city lots of money.

When council members asked Bratton about the lack of disciplinary action for officers who use excessive force, Bratton repeatedly deflected penal responsibility to the Civilian Complaint Review Board(CCRB), the city’s agency tasked with investigating complaints against the police department.

Bratton said it was their responsibility “to determine if there was in fact any criminality involved in the use of that particular force by an officer.”

The latest data from the CCRB shows that this year, out of all complaints that were substantiated, the police department only disciplined officers in 58.5 percent of the cases.

During the hearing, Bratton also criticized the CCRB for a backlog in investigating cases, and for sometimes “overcharging” officers in their recommendations.

He characterized the police department’s relationship with the CCRB as “a bridge to nowhere,” but expressed that he hopes to work with the new CCRB chair Richard Emery to settle differences in opinions over what is appropriate discipline for officers.

When council members asked Bratton whether he acknowledged that issues of race and class were factors in the deterioration of relations between the police and communities of color, Bratton admitted that it was “an unresolved issue that we wrestle with every day in American policing.”

During the hearing, Bratton also justified his “broken windows” policy, which criminalizes non-violent offenses in the hopes of deterring offenders from committing heavier crimes. When Councilman Robert Cornegy Jr. asked about the increased arrests of subway dancers, Bratton said that despite the arrests, the dancers still have not complied with the rule, so the arrests were justified.

Prior to the hearing, several protestors gathered in front of the steps of City Hall to oppose Bratton’s policing strategy, arguing that “broken windows” targets communities of color, and that training will not do enough to stop the culture of brutality.