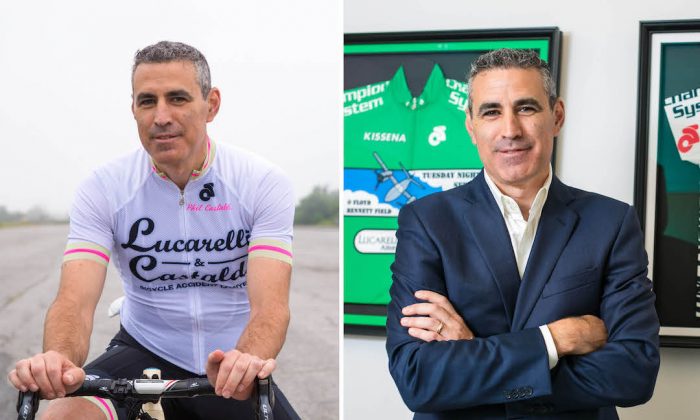 NEW YORK—Personal injury attorneys have long been stigmatized as low life bottom feeders waiting to profit off of someone else’s misfortune. Despite the long-lived stereotype fueled by Hollywood movies, Phil Castaldi happened upon a way to remove the stigma and gain respect from the many people he helps everyday.

Castaldi, a New York City personal injury attorney and avid cyclist, began focusing his practice on cyclists involved in accidents and has become a “go to guy” in the NYC biking community.

“People are always saying, ‘got to call Phil,’ or ‘got to call Lucarelli and Castaldi,'” said Castaldi at his Wall Street office.

Unlike some of the other personal injury attorneys, Castaldi is an active member of the cycling community that he represents, so he understands how important a bicycle is to his client. He also has an intricate knowledge of the different parts of a bicycle, which is important when estimating the cost of a replacement or repairs.

The decision to focus the practice on cyclists happened by chance a couple of years ago. His older brother, also an avid cyclist, asked Castaldi if the law firm would co-sponsor the Wonder Wheels bike racing team (the main sponsor is Deno’s Wonder Wheel Amusement Park in Coney Island).

Castaldi had been a personal injury attorney for 25 years, and a cyclist even longer. He raced back in his high school days because his Brooklyn high school didn’t have any sports teams.

“I had to find something,” said Castaldi, who played on different sports teams in middle school.

He had stopped racing after he got married then concentrated on working and raising a family. “No time to bike race,” he said.

He thought it was a bit unusual for his brother to ask for the sponsorship, but agreed anyway. And then members of the Wonder Wheels team encouraged him to ride again.

“Of course the guys said, ‘come on Phil, you’ve got to come out and ride with us,'” he recalled. And he had to admit, “Way back, I was pretty good.”

Back in the Game

He started out by riding as a member of the Wonder Wheels team. He said the Lucarelli and Castaldi name was really small on the jersey so nobody knew he was the co-sponsor.

He started the Lucarelli and Castaldi team and the law firm began sponsoring entire racing series throughout the city. “Once I came out in my own jersey people said, ‘This is the guy sponsoring all these races,'” he said.

The firm also works with Transportation Alternatives, a nonprofit that fights for improvements to the city’s infrastructure to reduce speeding and traffic crashes.

At 51, Castaldi’s love for cycling has been reinvigorated. He participates in the Masters and Category 3 races. Through racing and establishing a camaraderie with fellow cyclists, he naturally gets to know people on a personal level.

“The best part of the whole thing is going for coffee with the guys after,” said Castaldi relishing the thought. “It’s the best part.”

People appreciate Castaldi’s support and many cyclists have become his friends and clients, he said.

Castaldi was inspired to become a lawyer because once in high school then again in college, cars ran into him while he was riding his bike. Although he didn’t get hurt, his expensive racing bikes were damaged.

For most of his years practicing personal injury law, Castaldi mostly worked on automobile accident cases.

There aren’t that many attorneys in the city who specialize in bike accidents, according to Castaldi.

The New York Department of Transportation calculated that in 2014, there were 4,783 accidents in the city involving bicycles.

Under New York law a cyclist involved in an accident can sue if injured or the bike is damaged, but the law doesn’t cover cyclists hurt during a race because they automatically assume the risk, Castaldi said.

Regardless of the number of accidents reported, Castaldi’s firm is selective about the cases they take on. Some can be handled in small claims court, he said, and the firm prefers to provide quality representation.

“We don’t take a tremendous amount of cases, and I think that’s better because I know my clients personally,” he said. Castaldi and his partner Thomas Lucarelli work on all of the cases, so when a client calls up, they both know how the case is going.

Castaldi also knows about bicycles and what they’re worth. “If somebody calls me up and says, ‘I have a carbon seat post and my bike has aluminum rims on it,’ I know exactly what they’re talking about,” he said rattling off many other parts of a bike he knows like the back of his hand.

Racing bikes can cost as much as $15,000 and insurance companies have a hard time believing it, he said.

But not every client rides an expensive bike. He represents all riders such as bike messengers whose bikes are priceless to them. And if they get hurt, it’s an added burden.

He often recoups an injured client’s property damage without taking a dime.

“I don’t take a fee so people have the money to replace their bike,” he said.

Castaldi says he enjoys cycling and participating in events. He genuinely cares about the people in this city and he doesn’t want to see anyone get hurt.

What To Do If You Are Involved in a Bicycle Accident