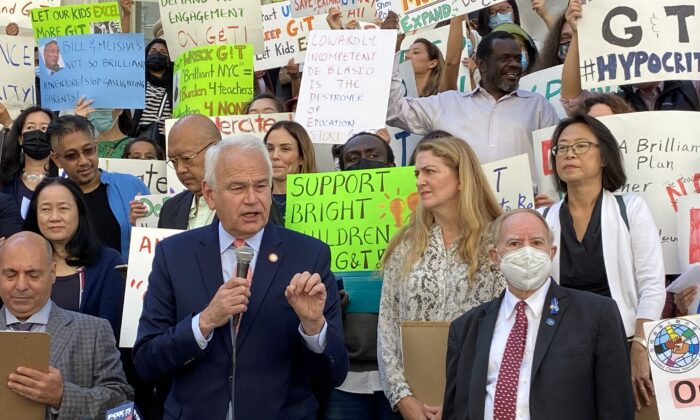 Parents of diverse ethnic backgrounds gathered outside the Department of Education on Thursday to demand that NYC’s Gifted and Talented (G&T) program be preserved.

Several city officials accompanied the more than 200 parents and supporters from all five administrative districts and condemned the mayor’s leftist “political education” agenda.

Mayor Bill de Blasio, who has less than 3 months in office, announced last week that the G&T program would be phased out and replaced with his own progressive program.

Black and Hispanic parents took to microphones and rebutted de Blasio’s claim that his new model is more “equitable.”

Opposers of the G&T program say that it is racist in that it foments racial polarity since it enrolls a low number of black and Hispanic students.

Colton said that he was a teacher for 11 years and taught in the public school system.

In 2 of those 11 years, he said he had the opportunity to teach children that were years above their grade level.

“And the children in my class were all African American students, and they were great!” Colton exclaimed, “they were great! they were doing so well in the gifted and talented class, these were the students who were getting admitted into specialized high schools, [such as Brooklyn Tech] our own Brooklyn tech these were the students that constituted our majority of Brooklyn Tech in those days.”

He then chanted along with the parents “Save G&T” and “expand G&T!”

Holden introduced a resolution in 2018 to expand the G&T program.

“It had a hearing, overwhelming support,” Holden said, “so what happened? Nothing. No message from the city council. They’re not advancing the resolution. They’re not really promoting G&T because this mayor doesn’t believe in excellence.”

Mayoral candidate Eric Adams said on Wednesday that he supports the G&T program and that it “is part of the conversation.”

“We’re going to sit down with parents, teachers, educators. I have a great team that I’m meeting with and I see that the test should be still in place. Even if it means expanding or having children opt-out. Let everyone take it,” Adams said.

“Four years old should not determine the rest of your educational career,” Adams added. “It should be ensuring that we can do beyond four and continue to assess students for their needs.”