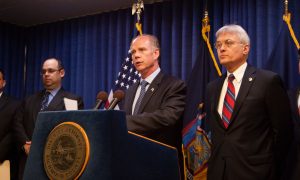 NEW YORK—City officials want New Yorkers to be on alert against scams, particularly since New York has one of the highest identity theft rates in the country.

As part of National Protect Your Identity Week, City Councilman Dan Garodnick said people should remain cautious when they make purchases over the Internet.

“The scourge of identity theft has reached epidemic proportions, which is why we are taking strong steps in the State Assembly to combat this terrible problem,” he said in a release.

New York has among the highest rates of identity theft in the United States, according to the Department of Consumer Affairs.

The Manhattan district attorney’s office handles 200 to 300 identity theft cases a month, and the load is increasing, according to Garodnick’s website.

Garodnick compiled a list of tips to protect one’s identity while shopping online.

They include: being wary of e-mails sent by strangers, only shopping with trusted merchants, not using public computers or public wireless access points for transactions, and using secure browsers.

Consumers should also pay with a credit card instead of debit cards, being wary of account update scams or upgrading anti-virus software, and ignoring pop-up browser links. Keeping paper records of your transactions could also help you detect fraud.

Garodnick also suggests formatting your hard drive or deleting all your personal data before considering selling or recycling your computer.

In 2011, almost 11.6 million people nationwide were victims of identity theft, up 13 percent on 2010, according to a report by Javelin Strategy & Research.