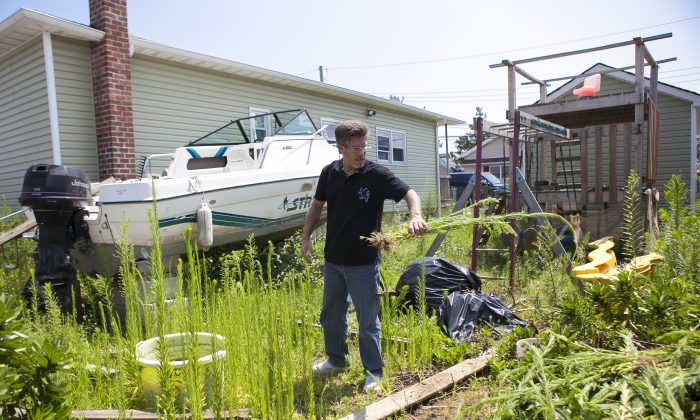 NYC Officials Get ‘Hands On’ With Sandy Recovery

As an end-of-summer deadline approaches, one Build It Back applicant has the city's director of housing recovery on speed dial
By Genevieve Belmaker, Epoch Times
Share
FacebookFlipboardTweetRedditEmail
MOREPRINTFONT BFONT S

NEW YORK—The sound of hammers are finally ringing in Superstorm Sandy-impacted communities, but they are still few and far between. A key ingredient in the progress: the close personal involvement of various elected officials and mayor’s office appointees, including Amy Peterson, director of the city’s Office of Housing Recovery.

Yet even those receiving close, personal attention still find the city’s housing recovery program, Build It Back, lacking.

“I think the program is so flawed,” said Joe Panetta, 41, at his home in Broad Channel, Queens last week. “There’s too many different departments handling this and it should be simple—it seems like every time you think you’re done, you have more hurdles.”

Panetta, who is married with four children, started rebuilding on his own after the storm and couldn’t finish. He said he was applicant number 508 out of about 22,000, but was initially told he didn’t qualify for help. Twice.

These days, though, he and Office of Housing Recovery’s Peterson are in frequent contact, which has made all the difference. His family is set to move into their new home in August.

Even so close to the end, he still faces hurdles.

“It’s endless,” he said of the paperwork and bureaucracy. “Before, I didn’t think they were going to do anything.”

These days, Peterson is in close touch with him to make sure he knows he is not forgotten, even on Sundays.

“She’s on speed dial,” said Panetta of Peterson, who is known to offer her contact information to applicants, especially those with tricky cases like the Panettas.

Only on the job since this spring, she’s also known for being one of the first to arrive and last to leave at the numerous public meetings held throughout Sandy-impacted communities.

But even Peterson’s heroics are not enough.

For Council member Mark Treyger, who represents Coney Island and is chair of the City Council’s Recovery and Resiliency Committee, the key ingredient is a “greater sense of urgency.”

“To me, the best way to turn it around is to start getting some success stories,” said Treyger on Tuesday. Though he has nothing but praise for Peterson, he quips that having the power to actually implement changes as they are needed is critical. “The issue still remains, how much power does she have, how much power does local government have, to work through government regulations?”

Treyger characterizes the current stage of Sandy recovery as “having just found the tunnel” to eventually emerge from. He is adamant that the more hands-on, up-close involvement, the better. In one sense, that means shifting the focus from Build It Back’s endless stream of paperwork to working toward actual results.

“We don’t need more data entry people,” he said. “We need people empowered to make decisions on the ground.”

To that end, Treyger and several other state and city elected officials are now hosting Build It Back representatives in their district offices. The program already has four centers operating throughout the city assisted by elected officials.

State Sen. Joseph Addabbo Jr. offered space adjacent to his Howard Beach, Queens office, which was hit hard by Sandy, beginning in June. Build It Back uses the space only once a week, but Addabbo estimates 50–60 of his constituents come each time for meetings. The service eliminates the need for applicants to travel back and forth to a Build It Back center, paying a toll to get there each time.

“These are people who are already suffering financially,” said Addabbo on Tuesday, who said that having Peterson at the helm has helped increase accountability and decrease lost paperwork. He still feels it is not enough, though.

“Things have gotten better, although for many of my constituents they need help immediately.”

For the Walsh family of Broad Channel—John, Stacey, and their teenage daughters Alexa and Jessica—that’s an understatement. Out of their home since just after Sandy, the family has been separated and forced to move repeatedly. They are now located about 80 miles away on Long Island. That physical distance makes for slow progress, and their empty home remains untouched.

Yet they remain determined to forge through the Build It Back process and are now at a final consultation phase.

“What am I going to do if I give up?” asked Stacey Walsh last week from her home’s back porch. “Live in that shack?”

She and her family drove for more than two hours to check on their house, visit neighbors, and inquire about possible work. It’s been such a long process at this point, any sign of progress is almost too little, too late.

“I don’t believe a word [about progress],” she said. “I’ll believe it when I see it. So far the only progress I’ve heard of is because of political connections.”

CORRECTION:  The lead photo originally published with this article showed a home on Staten Island damaged by Hurricane Sandy that is not part of the Build It Back program.