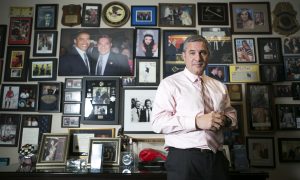 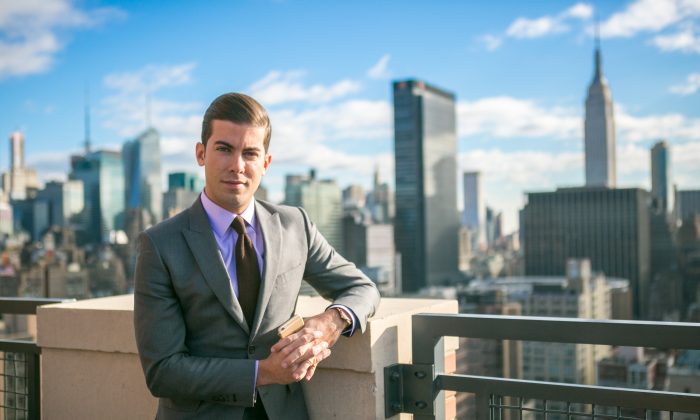 NEW YORK—Looking south from a terrace on a rental building at the Highline in West Chelsea, four cranes can be seen at work on new developments off in the distance. The World Trade Center’s towers are behind them, and the Statue of Liberty stands nobly in Hudson far behind it all. Turning east, the Empire State Building is just five avenues away. And one street to the north lies the game-changer: Hudson Yards.

From his living room window on the 30th floor of Abington House, Million Dollar Listing NYC star Luis D. Ortiz, observes the construction crews across the street. In August, when he moved here, the yards were just rising out of the ground.

“I’m a fan of being in neighborhoods that are going to be up and coming—not up and coming, seeing a neighborhood being built,” Ortiz said. “You’re in the midst of something amazing, which is Hudson Yards.”

The Far West Side neighborhood by the Highline is still only “secretly established,” according to Ortiz.

“You have galleries, secret restaurants that nobody knows about. When Hudson Yards is finished being built all the hotels, the commercial, the retail, the residential that’s going to be here—it’s going to be a different neighborhood,” he said.

Ortiz was drawn to Abington House’s luxury amenities, which include an Equinox gym, an entertainment lounge, two sun terraces (one with several BBQ grills), and a quiet room, called the sanctuary.

Despite all the appeal, Ortiz doesn’t have much time to use the amenities. When he is in his 1,400 square foot two-bedroom apartment, he enjoys some quiet time, or entertains friends and family.

At Gotham West, a rental tower in West 45th Street, the price ranges are similar. The available two-bedroom apartments cost from $6,895 to $7,095.

The 28-year-old pays an additional fee for a garage next door for his Maserati Quattroporte, which transports him to work at Douglas Elliman each day. He bought the car in August for more than $100,000.

“I always wanted to drive an Italian car, because Italian cars are always about the pleasure of driving them. It’s a machine that just a beauty to drive, because it’s fast and it’s just made to drive,” he said.

Ortiz is the son of two attorneys. He was raised in the Puerto Rican city of Guaynabo. He has three older sisters on his father’s side, and a paternal twin brother called Daniel.

The day after they graduated high school, Ortiz and his brother left Puerto Rico for Fort Lauderdale.

That was 2004. Ortiz’s first job there was as a janitor. “I was a very good janitor,” Ortiz said.

He later got a job in the stock room at Hollister. “They never let me on the floor. I don’t know why. I wasn’t pretty enough. I wasn’t like surfer-looking enough. They had me in the back room putting sensors on shirts.”

His last job before moving to New York was in the tech room at The Art Institute of Fort Lauderdale, where he also took some classes.

In 2006 he studied at the New York Film Academy. After graduation he produced and directed a couple of short films. His second film, which he shot in South America, was in his words “a disaster.”

He returned to New York, took residence on a friend’s couch, and started searching for an apartment.

He saw a 2-bedroom, 2-bathroom apartment listed on Craigslist for $2,400 a month. It looked perfect for him and his brother.

But the apartment, they soon discovered was not a 2-bedroom.

“It was a studio, that the broker said you could put a wall here and a wall there and make it into 2-bedrooms, you know the whole scam,” Ortiz said.

“But anyways, I loved the apartment, but I didn’t have a job so I couldn’t qualify. And then my brother reminded me that when he took a loan for college, he put his name on the application and was confused by my father’s name…”

They decided to do the same thing to obtain a loan for their apartment: use their father’s credentials to secure a line of credit. They paid six months rent up front and got the apartment.

“The broker then told me that I just brokered the most unbrokerable deal because I was an unqualified client. And he said, ‘you should try real estate.’ And I was so frustrated with the film that I said, ‘you know what, let’s go.'”

While many affluent young people may have a great job and the down payment required to buy their own apartment, Douglas Elliman’s director of rentals Luciane Serifovic has seen a trend where wealthy people opt to rent so they can test out different neighborhoods. New York City renters stay in their apartments for two to three years on average, she said.

The most popular areas in Manhattan for younger renters are Tribeca, West Village, Soho, and then Chelsea, according to Serifovic.

Renting can reduce other burdens and mean less responsibility if something goes wrong with either the property or the market, she said.

“With what happened in 2008, people still feel a little bit uncertain and a little bit nervous,” she said. “If they do buy something and they take the down payment that is money out of their bank account. And if something happens with their job, they’re still stuck with their mortgage.”

“A lot of buildings you buy in, unless your spending millions, you don’t get the luxury and amenities that you get in a luxury rental,” Serifovic said.

Jonathan Miller, the president and CEO of Miller Samuel, said high rents with growing competition force “amenity wars.” He has also observed a new urbanism trend of young professionals being drawn into the city for the walkable neighborhoods and the self-contained amenities of these developments.

“Nearly all of the new condo product is priced way above first time buyers affordability, so if a young professional wants new construction, rental is largely the only choice available right now,” he said.

The amenity-filled rental towers in Manhattan can provide a good platform for new comers to New York City to learn about different neighborhoods, according to Itzy Garay, executive vice president of leasing at Town Residential.

“The renter today is very savvy and they like new [developments], and they like amenities. They are very tech savvy as well,” she said.

Ryan Severino, senior economist and associate director of research at Reis, said the economic recovery over the last four or five years has created a lot of jobs for young people, and in turn unleashed a lot of demand on the housing market “significantly faster than supply has been able to keep pace.

“So its created this very very competitive market place,” he said.

“It’s almost become like a nuclear arms race. In order to attract people, you have to have the gyms, the media room, the socializing room, and a coffee bar, because the units are generally on the smaller size,” Severino said.

“In general research tends to show young people spend less time in their units than families do, so it is not as big of a deal to them if their units aren’t so large,” he said.

Ortiz has lived in four different addresses in the Financial District, including two on Wall Street. Before Abington House, he was in another amenity-filled tower in Battery Park City.

“There’s a certain credibility you get as an agent living in the neighborhood that you sell,” Ortiz said.

And sell he does. The majority of the listings on his Douglas Elliman page are in contract. Sometimes, all he has to do is put his listings on social media, and his 700,000 followers across Twitter, Instagram, and Facebook help him spread the word.

“I have sold two properties over Instagram and that’s insane. That’s how the world is working. It’s insane,” he said.

His role on Million Dollar Listing New York City has added to his credibility as a real estate agent. The show is now syndicated in 140 countries. Two weeks ago while in London on business he discovered that the British also watch the show.

Ortiz owns several condos in Manhattan. His properties are all rentals, and he likes to add at least one property to his investment portfolio each year. “As for me living in it, I like to know what neighborhood I want to buy for myself, so I explore,” he said.

“So actually, next year I may stay here (in Abington House). I sort of like it. But we’ll see what the world brings, maybe I’ll marry a rich billionaire and escape with her to Turkey,” he joked.

Ortiz describes himself as passionate, ambitious, curious, happy, and impatient. “I’m not a very patient man, and I want things. I want results right away, and sometimes it’s not the way life works,” he said.