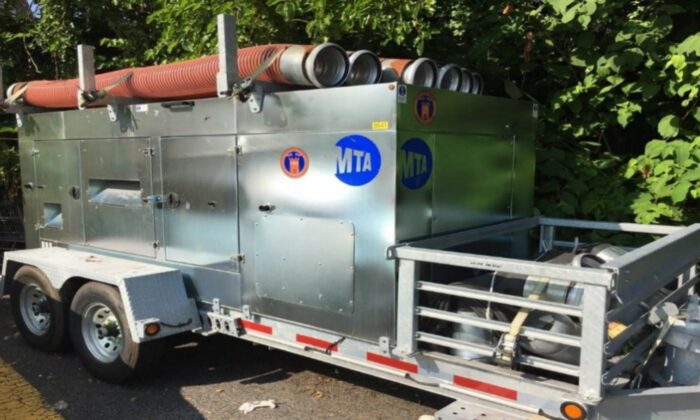 NYC Metro Transit Authority Spent $1.5 Million on Flood Pumps Nobody Knew How to Use

The New York City metro public transportation company spent $1.5 million on pump trucks to mitigate flooding, but none of its personnel got trained to operate them so they just sat parked for years with no maintenance, according to the watchdog agency that oversees the state-owned company.

The Metropolitan Transportation Authority (MTA) bought the 12 trailer-mounted diesel pumps in 2018 with money from a federal grant meant to help the city mitigate flooding. The pumps could have proven handy just three weeks ago, when remnants of Hurricane Ida caused flash flooding that killed 49 in the New York-New Jersey area. But the pumps have stood idle because MTA personnel hasn’t been properly trained on how to run them, even though MTA paid for the training, according to a recent report by the MTA Inspector General (pdf).

The report said responsible employees and administrators knew nobody was taking care of the equipment, but didn’t do anything about it.

“According to depot staff responsible for operating the pumps should a flooding condition occur; they had not been trained on pump operation—nor had they even seen a pump being operated,” the report said. “This inexplicable lack of instruction not only leaves critical facilities at risk of flooding; it also likely has safety implications.”

MTA has an electronic maintenance system that automatically alerts crews what needs to be done and when. But the pumps came in with a manual that prescribed maintenance for continual operation of the pumps. That didn’t work for the MTA situation. The responsible people were supposed to figure out a different maintenance schedule, but didn’t until August 2020, when the Inspector General’s office (OIG) started to ask questions based on a tip-off.

The maintenance crews knew of the pumps and knew they weren’t taking care of them, but didn’t take the proper steps to fix the issue.

The MTA bought a robust training package with the pumps including a set of instruction videos and a 24-hour training of which at least 8 hours were supposed to be hands-on “training on operational and maintenance procedures, including troubleshooting and repair techniques,” the report said. Instead, only 10 employees went though an 8-hour training with almost no hands-on time. These 10 people were supposed to train others, but didn’t.

After the OIG started to look into the issue last year, the MTA worked out a maintenance checklist, put it into the system, and started issuing work orders. Only then did it learn that the crews couldn’t complete all of the tasks because they weren’t taught how.

The responsible supervisor “agreed that it took too long to develop the checklist and stated that this delay was ‘an anomaly because of the uniqueness of this equipment,’” the report said.

The staff is only “tentatively scheduled” to finally get trained sometime in the next three months.

The OIG is now checking whether the same issue exists in other parts of the company and with similar equipment.