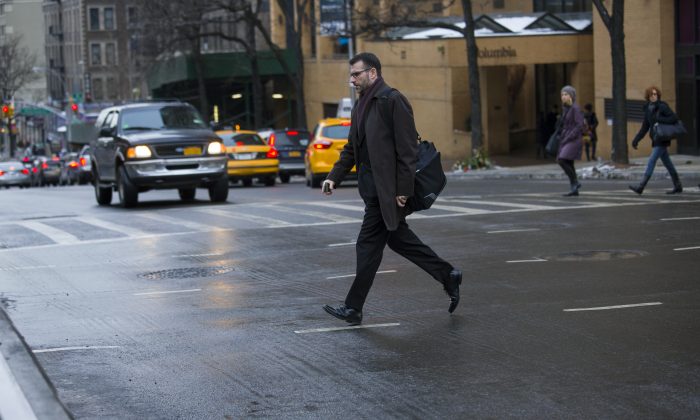 A Pedestrian moves quickly outside of a crosswalk at the busy intersection of W. 96th Street and Broadway in the Upper West Side of New York Monday, Jan. 27, 2014. Although it appears clear sometimes at this intersection, cars using turning lanes can quickly encroach on non-crosswalk areas. (AP Photo/Craig Ruttle)
New York

When the mayor announced his launch of the project on Jan. 15, he created a multi-agency task force and gave it a month to draft a plan to reduce the number of traffic-related deaths to zero in the next decade, the deadline for which was yesterday, Feb. 15.

In the weeks prior to the proposal submission, community groups, advocacy groups, and the media alike have outlined the city’s efforts to reduce traffic injuries and fatalities up to now, pointing out cultural barriers.

Judging by the city’s approach to traffic until now, the initiative is an ambitious push, but one that can’t come soon enough, advocates stress.

Before Vision Zero, the Department of Transportation had been on track to reduce traffic fatalities to 137 in 2030, according to a 2010 strategic plan. Now the number will need to be zero by 2024.

The New York Police Department plays another big role, and the nature of enforcement needed to reach zero traffic fatalities has also been called into question. The string of Upper West Side pedestrian fatalities in January had brought about a precinct initiative to ticket jaywalkers, which was quickly countered when an elderly man was treated violently by a police officer after jaywalking.

The incident drew vocal criticism from pedestrian advocacy and community groups who support Vision Zero. Both de Blasio and NYPD Commissioner Bill Bratton afterwards said the ticketing would not be a regular measure. Soon after, the 78th precinct in Brooklyn revealed the results of a week-long undercover sting in ticketing drivers who don’t yield to pedestrians–which the communities viewed as a very different sort of intention in enforcement.

New York City’s criminal laws for drivers have been called into question as well. According to police department data compiled by the Wall Street Journal, the number of pedestrian fatalities in the city rise as the number of only about 5 percent of crashes have arrests made for vehicular homicide. The reason for this is because sober drivers are not subject to homicide and vehicular manslaughter statutes in the state and city.

The task force also includes the Department of Health and Mental Hygiene (DOHMH) and the Taxi and Limousine Commission (TLC). While DOHMH is playing a supportive role in constructing  a plan, a spokesperson says the department “is also considering ways to leverage its interactions with children in school and childcare settings to help prevent injuries.”

DOHMH reviews incident, injury, and fatality data, and already does work with DOT to understand and characterize pedestrian injuries. “The task force will build on work we have done with Department of Transportation,” a spokesperson said.

TLC likewise has said it would play a supporting role in the task force. The commission regulates over 50,000 vehicles and twice as many drivers, playing a big part of the city’s transportation network.

Recent data analyzed by the New York Post also revealed that of the 16 fatal or serious crashes involving taxis since 2009, only two cab drivers had their license revoked.  Fromberg had said in response that those issues were actively being discussed within the agency right now as well. The agency does not currently track accident data for drivers, is exploring ways to access more real-time accident data.