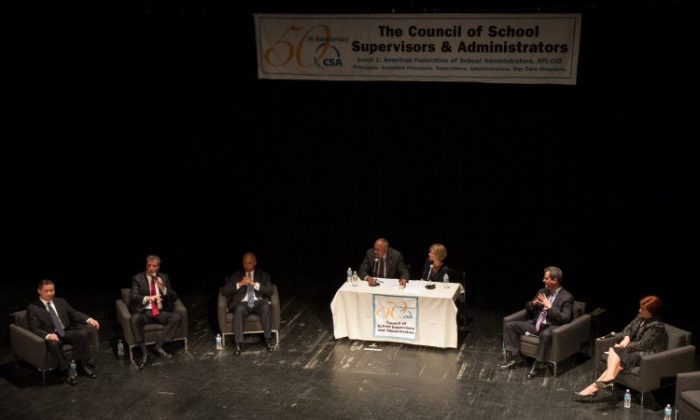 NEW YORK—Education, one of the most contentious current issues in the city, is set to also become one of the major deciders in the race for the next mayor.

Five mayoral hopefuls converged on a mostly full auditorium at Baruch College to discuss education on Jan. 31. The forum was arranged by the Council for School Administrators, a bargaining organization for principals, assistant principals, and supervisors in the city’s school system.

John Catsimatidis, who announced his candidacy Jan. 29, was absent from the forum though he was scheduled to attend. Fellow Republican Joseph Lhota was not on the schedule, although he stepped down from his job as MTA chief in order to run for mayor.

That left four Democratic candidates and Republican newspaper publisher Tom Allon at the forum. Below is a simplified version of what their views and backgrounds are on education.

Is the candidate a parent?

Co-location is when two or more schools are housed in the same building and has been around for a while. But the recent spate of co-locating charter schools in district (non-charter) schools has been disconcerting for some parents and the teacher’s union, among others.

Should Co-locations Be Stopped?

Allon: No. We “need to give charter schools the space they deserve.” But, we need to make sure parent associations and principals work collaboratively. Money that goes to charter schools should be shared with public schools.

de Blasio: Didn’t say; but did say politically connected people like Success Academy founder and president Eva Moskowitz: “they don’t tell the public school system what to do.”

Liu: Yes. “It’s painful. It’s painful for parents and students and administrators and principals and the surrounding community.”

Thompson: No, but needs to be equitable. Department of Education’s responsibility to make sure the other part of school gets some funding, too.

Mayor Michael Bloomberg finalized full mayoral control of schools after being elected in 2002. The system enables the mayor to exert control over the school system with little oversight (The school board hypothetically provides a check, but eight of the 13 school board members are appointed by the mayor.).

Would you advocate for continued mayoral control?

What Has Bloomberg Done Well?

Many of the mayoral candidates are critical of Mayor Bloomberg’s tenure.

But what are some good things he has done for education?

– Note: Some questions weren’t answered by everyone

Closing schools that are struggling then opening new ones (sometimes a shift from large schools to more but smaller schools) has irked many in the education sector.

The choice of Cathleen Black, a businesswoman, as schools chancellor was highly contentious and she stepped down from the office after three months due to the widespread displeasure with her job.

Subsequently, Dennis Walcott was appointed. He has extensive experience in education (including nine years as the city’s deputy mayor for education) but fell short of one requirement as a schools administrator (having taught for two years; the requirement is three, according to former mayoral spokesperson Stu Loeser). Both required waivers from the state Education Department because of a lack of or falling short of the experience required by the state.

Should the next Schools Chancellor be an educator?

Allon: Yes
de Blasio: Yes
Liu: Yes
Quinn: Should have educational experience, but could be a businessperson
Thompson: Yes

Ongoing negotiations between the teachers and supervisors and the city have included no raises for the last two years.

Would you give them a raise?

Allon: Mayor Bloomberg has left no money. “We’re going to have to get creative in how we fund any potential raises.” Example: merit pay for principals and teachers.

Thompson: “We don’t know know what the fiscal situation will be like.” Teachers, principals, and supervisors need raises, “but the truth is there is no money.” Would try to find money.

Classes that are too large have been a big problem for the city’s school system. According to Class Size Matters, the city promised to reduce average class sizes starting in 2007 after receiving more than $1 billion in additional state aid, but have failed to do so. About eight out of ten classes have more students than the Department of Education’s aimed for in 2011.

How can class sizes be reduced?

de Blasio: Hoping to get money from state. Look at using teachers and principals more creatively. Short-term, “new revenue … through a tax increase on the wealthiest.”

Liu: We have the money already—need to find it in the budget of the city’s Department of Education.

A wide range of those in the education sector have criticized the emphasis on testing (and test prep) in the schools’ system. Test data is cited by the mayor as a barometer, seeing which schools are doing well and which schools aren’t.

Would you reduce the emphasis on standardized testing?

Thousand of students are in poverty and thousands of other are homeless, according to Pedro Noguera, professor of education at New York University and one of the moderators of the event.

How can school system help these students and families?

Allon: Students should have full breakfast and gym in morning, citing example of New Merit Academy. “You walk around that school and it works and it’s beautiful and it doesn’t cost anything [extra].”

de Blasio: Supports Cincinnati model*, would be tremendous step forward, but “won’t sustain a bigger movement towards equity if we don’t have universal pre-K.” The system is much smaller there, 40,000 students. Here, we need added revenue.

Liu: School buildings should be opened longer and provide more resources to community.

Thompson: Bring more social services, but what makes Cincinnati model attractive is it doesn’t add money to budget for Department of Education.

Quinn: What we’ve already done here is good, but need to expand. Cincinnati is more focused on coordination and maximizing dedicated dollars in schools. “The school we saw (on a tour), it didn’t just have a clinic, it was opening an eye clinic, a private provider was opening an eye clinic. Why? Because they knew that most of the children in that school were on public insurance or on Medicaid and that they could get reimbursement.

*The United Federation of Teachers (the city’s teachers union) has studied the model for schools in Cincinnati extensively.

“Cincinnati has a seamless integration between day and afterschool, between teachers and community-based organizations. You can’t tell the difference,” said Karen Alford, union vice president, in a union release last year.

Please see our article from the first forum on education, late last year, where the candidates began to outline their prospective policies should they become mayor.