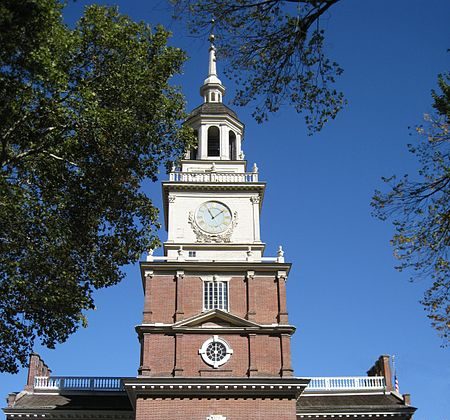 Independence Hall in Philadelphia saw the signing of the Declaration of Independence and the drafting of the United States Constitution. Elementary school tours may have to be cancelled if about 1.2 degrees of warming submerges the site.
New York

New York City Mayor Bill de Blasio said he was disappointed by the DNC’s decision to hold the 2016 Democratic National Convention in Philadelphia rather than in New York City.

It might have something to do with the city’s lack of parking space, he said, during a livestreamed City Hall press conference Thursday.

“I’m not happy with the outcome,” said de Blasio, who spent a significant amount of his first year in office working to get Brooklyn’s Barclays Center chosen. “I’m disappointed by definition.”

There were three criteria—resources, logistics, and security—that the DNC committee looked at and New York satisfied all of them, said the mayor. “It would have been obvious that we scored the highest,” he said.

The one thing New York did not have was many parking lots around the venue.

“The DNC just had a real preference for a classic American stadium with the giant parking lots around it,” said de Blasio. “I don’t have that to offer them in a place that we could do a convention.”

Last week, when the Super Bowl was held at Barclays, public transportation was the more convenient way to travel into the dense neighborhood. De Blasio allowed that the difficulty of driving was one flaw he had hoped Brooklyn’s cultural benefits would outweigh.

“But if, as a convention planner, if you have a strong preference for an arena surrounded by parking lots and you like the logistical ease that comes with that, okay. I don’t have that,” he said.

Still, Brooklyn had a sense of cultural vibrancy and diversity that would have fit the party message, said de Blasio, and Barclays was located in the heart of Brooklyn, giving the venue “an X factor” the politicians had been counting on to pull New York through.

And had New York been chosen, Hillary Clinton, who is rumored to run for president in 2016, would have been launched from her native state, which might have given her a symbolic advantage over others.

Instead, the convention will have the historical significance of being held in the city that is home to Independence Hall and the Liberty Bell. Some have said that the location decision was also strategic as Pennsylvania is a swing state.

De Blasio did make it clear that he would attend the convention nonetheless in Philadelphia.