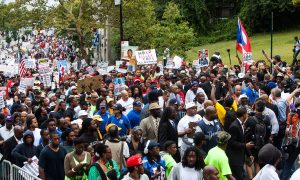 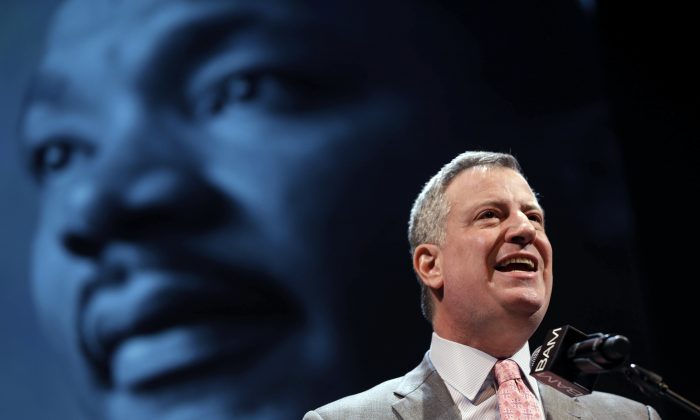 “We have to get rid of the sense that any of our differences preclude us from finding each other. That’s what Dr. King epitomized,” the mayor said at Monday’s Dr. King celebration held at the Manhattan headquarters of Rev. Al Sharpton’s civil rights organization, the National Action Network (NAN).

The relationship between law enforcement and minority communities has been a volatile issue this year in New York and elsewhere in the country.

After the death of an unarmed black man, Eric Garner at the hands of a white police officer, thousands of New Yorkers marched and demonstrated, calling for changes to the way law enforcement treats minority communities. When two police officers were shot and killed in Brooklyn by a mentally disturbed man, police union leaders blamed the protesters for fomenting sentiments against police that led to the killing.

When another unarmed black man, Michael Brown of Ferguson, Mo., was shot and killed by a white police officer, and grand juries chose not to indict the officers involved in both Garner’s and Brown’s deaths, the entire country debated the merits of our judicial system.

In light of these events, police reform was arguably the most pressing civil rights issue this past year and the main theme at the 2015 NAN MLK Day Policy Forum.

On Monday, De Blasio underscored the value of peaceful protests, noting that King exemplified the power of civil disobedience to make social change.

“No one more than Dr. King understood the nature of struggle,” the mayor said. “He insisted that we be relentless, that all of us be relentless. Dr. King didn’t say, ‘look at me, I’ll take care of this for you.’ He asked us all to be part of changing society for the better.”

De Blasio also gave measured criticism to protesters who made hateful comments against police officers in their protest chants, calling on the public to respect the officers who protect society.

Still, he mentioned the policing reforms under his administration—such as reduced stop-and-frisk and fewer arrests for marijuana possession—as signs of his commitment to making the criminal justice system fairer for minorities.

Other local elected officials, like City Council member Vanessa Gibson and Public Advocate Letitia James, echoed the mayor’s comments, emphasizing that the call for police reform is not at odds with showing support for police.

Other city, state, and federal politicians who spoke at the event reflected on the recent events as evidence that much work was still needed to achieve King’s vision of equal justice for all. Many reminded the audience that King would have wanted them all to keep fighting for change.

“It seems like we’ve come so far, but at the same time, it seems like we haven’t gone far enough. Just when we think we’re there, something else happens to show we’re not,” said state assembly member David Weprin.

“On this historic day, we should all sit back and reflect on all of our diversity, on all of us standing together to try to achieve, hopefully in our lifetime, the dream of the Rev. Martin Luther King Jr.,” he said.