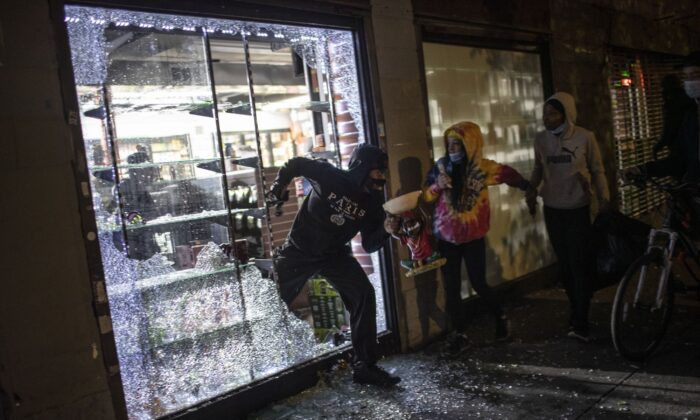 People run out of a smoke shop with smoking instruments after breaking in as police arrive in New York, N.Y., on June 1, 2020. (Wong Maye-E/AP Photo)
NY News

New York City Mayor Bill de Blasio declined to accept help from the National Guard, Gov. Andrew Cuomo said, as the governor mused that he could “displace” his fellow Democrat and take over his duties.

Looters and others fomenting chaos ran rampant in New York City on Monday night, stealing from stores, assaulting police officers, and setting fires, amid nationwide mayhem taking place at or near protests over the death of George Floyd, a black man who died in Minneapolis police custody.

Cuomo blamed de Blasio and the New York City Police Department (NYPD), telling reporters in Albany: “The mayor of New York City says he doesn’t need the National Guard and he doesn’t think they would be helpful and he can do it with the NYPD.”

“First, the NYPD and the mayor did not do their job last night. I believe that. Second, you have 38,000 NYPD people. It is the largest police department in the United States of America. Use 38,000 people and protect property. Use the police, protect property and people, look at the videos, it was a disgrace. I believe that,” he added.

Requests for comment from the NYPD and de Blasio’s office weren’t immediately returned.

Cuomo accused de Blasio of underestimating the scope and duration of the problem, charging it was “inarguable” that the looting and other issues weren’t properly addressed.

He then mused, shocking many political observers, that he could remove de Blasio and take over his duties.

“I’ve offered the National Guard, the mayor has said he could handle it with the NYPD. My option is to displace the mayor of New York City and bring in the National Guard as the governor in a state of emergency and basically take over. You would have to take over the mayor’s job. You’d have to displace the mayor. A., I don’t think we’re at that point. B., that would be such a chaotic situation in the midst of an already chaotic situation. I don’t think that makes any sense,” he said.

“Technically, the governor could remove a mayor but you have to file charges and then there’s an acting mayor. I don’t know if it’s ever been done.”

De Blasio spoke shortly before the governor at city hall, claiming a lot of people would say unhelpful things and try to divide New Yorkers.

The mayor said most of the people out on Monday and other recent nights were peaceful and want change.

The mayor said he was bringing the start of a nightly curfew from 11 p.m. to 8 p.m. and extending it through the end of the week. The deployment of NYPD would be more strategic, he said.

The situation in the nation’s largest city attracted criticism from many, including President Donald Trump, who said the previous 11 p.m. curfew wasn’t sufficient.

“No wonder they ripped the place apart. Should be 7:00 P.M.,” he said on Twitter, adding, “CALL UP THE NATIONAL GUARD.”