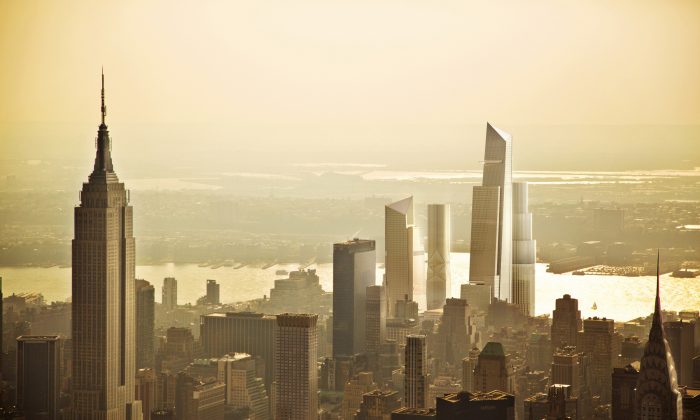 An artist rendering of the Hudson Yards redevelopment as it will look from Midtown Manhattan, New York. Time Warner Inc. announced Jan. 16, 2014 that it's planning to move its headquarters to Hudson Yards at 10th Avenue and West 33rd Street. (AP/Visualhouse via Hudson Yards)
New York

The City and development company Related Cos. have agreed on a living wage for workers at the Hudson Yards site, reversing the previous administration decision.

All employees to eventually work on the site will be paid at least $11.75.

Mayor Bill de Blasio has campaigned on many progressive items like requiring a living wage on city-backed developments, and announced that he is willing to work with developers on pushing for density in order to create more affordable housing.

The mayor recently reached an agreement with developer Two Trees on the Domino Sugar development in Brooklyn to add more affordable housing in return for building higher. Now, with the Hudson Yards deal, this reflects how development will play out in the city under the new administration.

According to Wall Street Journal, the city is seeking concessions with other large projects–approved or not–in the pipeline as well.

Related had been exempt from the living wage law inserted from the previous City Council speaker, a controversial issue at time. The developers had said requiring a living wage would impact their tenant negotiations.

Unionized workers on the Hudson Yards site already make above $11.75.