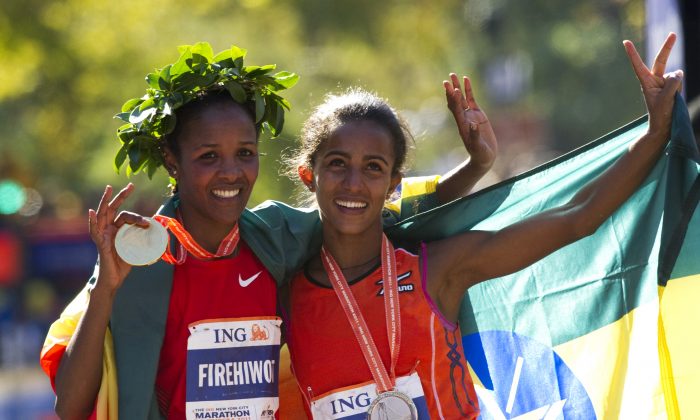 NEW YORK—As one hundred thousands of athletes from around the world prepare to compete in this year’s NYC marathon, two of the finalists in the female division are ready to claim the top prizes. They are longtime friends who trained together in Ethiopia.

In 2011, Firehiwot Dado made a debut in the NYC marathon. She came in first that year, establishing her personal best time of 2:23:15. Just days before the Sunday marathon, Dado spoke about her hopes and dreams at the Media Center set up for the marathon in Central Park.

“I’m happy that I’m back,” Dado said through her interpreter.

Last year, the 29-year-old Dado competed in the spring 2012 Boston Marathon and came in fourth. As she was training to compete in the 2012 NYC marathon that is always scheduled in the fall, her shoes caused her right foot to blister. Dado continued training in the shoes, which lead to a more serious injury, and withdrew from the race.

Then the 2012 NYC Marathon was canceled because of Superstorm Sandy, and the 2013 Boston Marathon ended on a tragic note, when two bombs went off at the finish line, claiming the lives of 3 people and injuring around 260 others.

Unshaken by the news from Boston, Dado said she her goal is win this year again.

She still trains in Ethiopia and has been training much better for this year’s race.

“To win in this marathon is going to be one of my biggest achievements,” Dado said.

For Dado, the 2011 race marked another happy occasion, as she was able to reunite with her longtime friend Buzunesh Deba who came in four seconds after Dado, claiming the second spot in the marathon.

“It was the happiest moment of my life, that day,” Dado said.

In her native home of Ethiopia, Dado started off as a sprinter. She said she had no intention to run long-distance, but her trainer insisted that she try out for the marathon. When she entered the 2009 Rome Marathon, Dado came in first. She remained first in Rome for three consecutive years.

RELATED: Records to Watch at the 2013 NYC Marathon

RELATED: 9 Facts About the 2013 NYC Marathon

Deba, three years younger, trained with Dado in Ethiopia in their small town of Asella, in Arsi Province. Deba moved to New York City in 2005, but the two have kept in touch ever since.

When Deba saw Dado’s name entered in the New York race in 2011, she was surprised and overjoyed.

“I missed her,” Deba said. The two reunited after seven years.

“If there’s anything, I will never forget that day, because Buzunesh and I grew up together, we were very close friends, and I love her very much,” Dado said.

During the 2011 race, after several miles, the two started talking. Deba offered water to Dado, and was trying to control another contender who was catching up.

“In 2011 I was very excited. That time I prepared very well, and I was focused to win,” Deba said. Although coming in second make Deba happy, she said this year she’s been doing much more training.

Deba lives in the Bronx and trains at the Van Cortlandt Track Club. She runs the 31-mile circumference of Manhattan Island as part of her training, and does anywhere from 130 to 135 miles of running per week.

The two friends will compete against strong female athletes this year, with some entering the marathon for the first time, like Priscah Jeptoo from Kenya. Jeptoo came in first at the Virgin London Marathon this April, with an impressive time of 2:20:15.