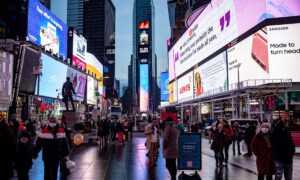 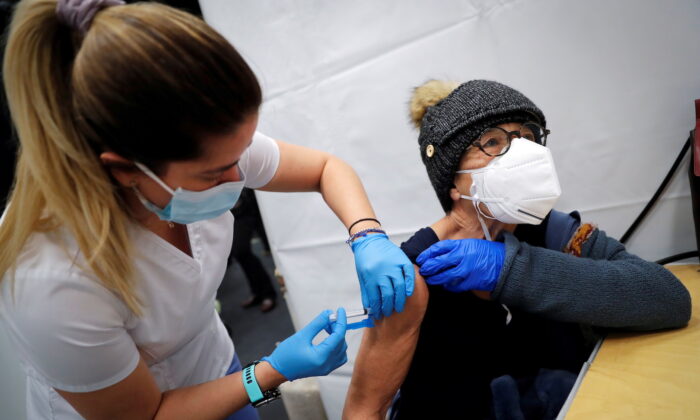 A healthcare worker administers a shot of the Moderna COVID-19 vaccine to a woman at a pop-up vaccination site operated by SOMOS Community Care during the pandemic in Manhattan in New York City, on Jan. 29, 2021. (Mike Segar/Reuters)
Vaccines & Safety

New York City is requiring staff at city-run hospitals and clinics to get tested against COVID-19 on a weekly basis or get vaccinated, a move that prompted rallies by the nation’s largest healthcare union.

Mayor Bill de Blasio announced the new policy at a press briefing on Wednesday, explaining the measure will go into effect on Aug. 2, and any employee who fails to show either a one-time proof of vaccination or a weekly negative test will have their pay suspended.

“We see the delta variant, and we see the case numbers rising and it’s time to act. So, today we announce something new,” the mayor said. “We need a strong clear approach and every single one of our workers gets vaccinated or gets tested weekly.”

The requirement marks the first time City Hall has mandated vaccinations or negative tests for public-sector workers. The Democratic mayor added that it is likely that the measure could eventually be applied to other city workers, including teachers, and police officers if the threat posed by the Delta variant remains.

“If we push hard on vaccinations … I think that’s the best way to get this done,” de Blasio said as he also noted that the weekly testing rule could encourage more health care employees to get inoculated.

The Delta variant, first identified in India, is becoming more prevalent and now accounts for around 83 percent of all new sequenced cases in the United States, Dr. Rochelle Walensky, the head of the Centers for Disease Control and Prevention (CDC) said earlier this week.

The more contagious variant of the CCP virus has spread to more than 100 countries, according to the World Health Organization (WHO). Dr. Poonam Singh, the WHO’s regional director for southeast Asia, told news agency ANI that the Delta variant could soon become the most dominant strain globally, saying that, “among all variants of concern, Delta spreads most rapidly.”

Workers with 1199 Service Employees International Union (SEIU), the largest healthcare union in the United States, rallied on Thursday against a similar measure announced last month which requires all of its 48,000 employees to have received the first dose of a COVID-10 vaccine by Sept. 1—unless there’s a medical or religious exemption.

Pharmacist John Simonian, along with hundreds of union members, protested outside the private hospital to also have the option between getting a weekly test or be vaccinated.

“Force is not the answer, and mandate forcing people at the barrel of a gun is not right,” Simonian told NY1. “If you force [me] to do one thing in one area, there’s a possibility you can force me to do something in another area.”

“I know other members who are vaccinated, and they feel it should be a personal choice and try to make it for the right reasons for yourself and for your coworkers,” he added, noting that hospital workers should be trusted to make their own decision.

About 60 percent of the more than 42,000 employees of NYC’s public hospital system are vaccinated, Mitch Katz, who heads the nation’s largest public healthcare system, said on Wednesday. Across the city, 70 percent of hospital staff have received both doses of the vaccine, state data shows.