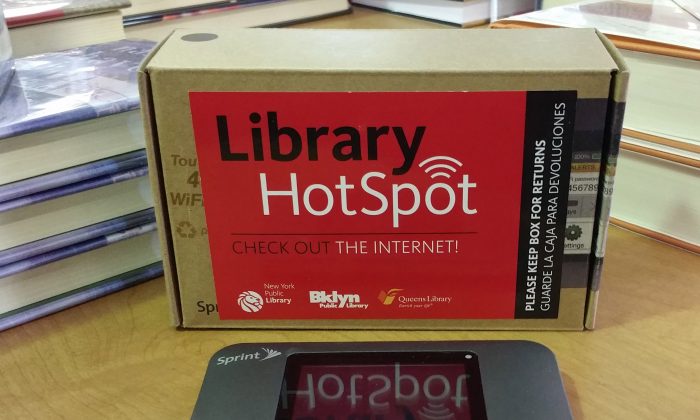 A mobile wireless Internet hotspot lay on a desk among piles of books at the Free Public Library in New York on Jan. 10, 2015. The New York Public Library is launching the nation’s largest Internet lending program, which provides 10,000 of these hot spots free for one year to some of the city's poorest residents. (AP Photo/Verena Dobnik)
New York

The program—which offers the devices for up to a year, about a $1,000 value—seeks to bridge a digital divide in the nation’s largest city, where studies have found nearly 3 million of the 8 million people lack broadband access.

“It is simply unfathomable that in the digital world in which we live, one-third of New Yorkers do not have access to broadband Internet at home, putting them at a serious disadvantage at school, in applying for jobs, and so much more,” said Anthony Marx, president of the New York Public Library.

It is simply unfathomable that in the digital world in which we live, one-third of New Yorkers do not have access to broadband Internet at home…
— Anthony Marx, president of the New York Public Library

In addition, Mobile Beacon has similar projects in 74 communities in 20 states, from cities including Chicago and Los Angeles to rural areas of Kansas, Pennsylvania, and Texas.

While requirements differ, borrowers generally are eligible if they don’t have their own broadband and are registered in library educational programs.

Outreach efforts also are aimed at the elderly and disabled seeking health care.

There’s one challenge: making sure users have laptops or desktops to link in. Google has so far donated 500 laptops—plus half of the $2 million in private grants funding the New York City program—and schools supply them to many children.

“Computers are awesome,” said 10-year-old Carlos Apreza of Staten Island, boasting that his school grades went up by about 30 percent since he got both the hot spot and a computer from the library last year as part of a small test run for the program that was expanded in December.
Carlos and his brother live on a family income of about $13,000 a year—from their father’s paycheck as a restaurant dishwasher.

“We can buy food and some clothes,” he added, “but we don’t have enough money for technology.”

At the Acosta house in Staten Island, the hot spot they started using last year, also as part of the test, has already reaped benefits.

“Our 9-year-old son won first-place at a science fair after learning how to make compost—from the Internet,” said Evelyn Acosta, supervisor of a home for the developmentally disabled who is the family’s sole breadwinner. Her husband is on disability.

Mobile Beacon pioneered the library Internet-lending model three years ago at the Providence Community Library, which previously had provided Internet access only through on-site library computers.