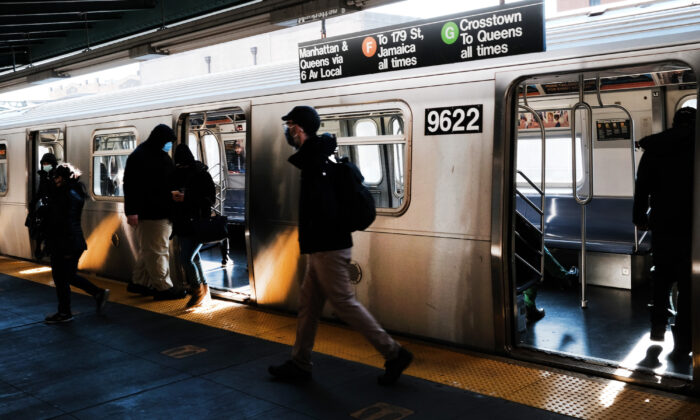 People walk off of a subway train at a Brooklyn station on Nov. 18, 2020 in New York City. (Spencer Platt/Getty Images)
NY News

A proposed bill would impose a $3 tax on any online delivery that is not food or medicine in New York City, in an effort to fund the city’s struggling public transportation.

Bill A06078B was proposed by Assemblyman Robert Carroll, a Democrat who won reelection last month. The one-sentence-long bill reads, “Adds a three dollar surcharge on online delivery transactions terminating within the city of New York to be used to fund the operating costs of buses and subways in the city of New York.”

In a New York Daily News op-ed with co-author John Samuelsen, the international president of Transport Workers Union, Carroll wrote that the measure could raise $1 billion for the Metropolitan Transportation Authority (MTA) based on an estimated 1.8 million packages being delivered daily to homes in the city.

Following a significant decline in ridership due to the CCP virus pandemic, The MTA projected in August a $16.2 billion deficit to 2024. Last month, the agency said it needed a $12 billion government bailout, otherwise it might not be able to get through 2021.

According to Carroll a $3 surcharge could also encourage more New Yorkers to shop locally and prompt consumers and delivery companies to consolidate multiple items into one package for delivery.

“Shopping online is cheap and convenient. It also means more trucks clogging city traffic, slowing buses, and spewing pollution, all of which have costs of their own,” the op-ed read. “The delivery siege will only get worse. Online commerce is booming. Amazon’s profits are up 53 percent compared to last year.”

E-commerce retailers such as Amazon have seen exponential growth this year. In October, Amazon reported that its net income increased to $6.3 billion in the third quarter, compared with net income of $2.1 billion in third quarter 2019. Jeff Bezos, Amazon’s founder and chief executive, said his company has created over 400,000 jobs this year alone, and was seeing “more customers than ever shopping early for their holiday gifts, which is just one of the signs that this is going to be an unprecedented holiday season.”

Tim Minton, an MTA spokesman, said in a statement that the proposed law alone may still not be able to save the agency from the looming financial crisis.

“We have been clear only $12 billion in federal relief can prevent drastic service cuts, layoffs, and gutting our historic capital plan that would devastate our colleagues and customers,” Minton said. “While the MTA welcomes creative solutions and any new revenue, the proposal is subject to the state legislative process and cannot itself solve the problem, which is why we urge continued advocacy in Washington.”