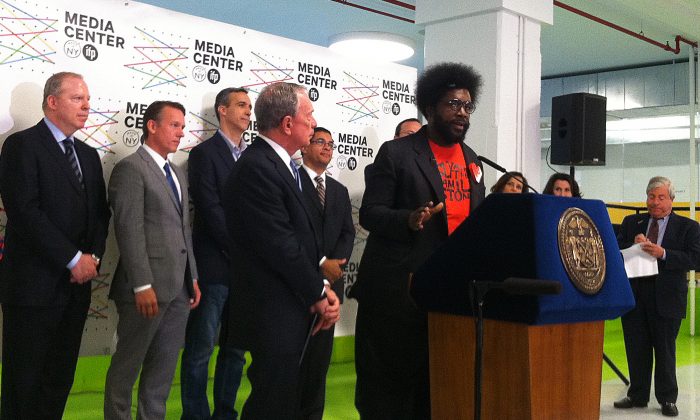 NEW YORK—In an effort to continue its place as the media capital of the world, the city launched a new media center in Brooklyn, New York’s DUMBO neighborhood Tuesday.

The Made in NY Media Center at 30 John St. will focus on growing talent in the media and high-tech industries, industries that have seen unprecedented growth in the last 10 years in New York City.

The city’s production industry contributes more than $7 billion to the local economy each year and employs 130,000 workers. New York City passed Boston to become the nation’s second most funded area after Silicon Valley, with over $8.3 billion in acquisitions in 2012.

This is the first incubator nourishing new talent focused on both media and high-tech. Currently the city has 10 incubators in a variety of industries providing over 1,000 jobs.

The media center will host space for those in film, art, music, gaming, and production.

“The birth of any new movement—be it the hip hop movement, the punk movement, it has a center, a place for like-minded artists and people come to collaborate and trade ideas,” said Questlove of Grammy Award-winning band The Roots, who was named as a founding artist and resident.

“Who knows, maybe I will create the new ‘The Tonight Show’ theme with someone here at this center,” Questlove said.

In addition to the media center, Mayor Michael Bloomberg announced a first-of-its-kind duel degree plan through Cornell NYC Tech. Cornell is building a campus on Roosevelt Island. The master’s degree, called a connective media program, will train entrepreneurial engineers and technologists, something needed in the media sector.

“This is a critically important effort for big media companies, as we are addressing the fact that consumers are moving to mobile media faster than we have ever seen before,” said Philip Wiser, CTO at the Hearst Corporation.

Hearst, along with The New York Times, Facebook, and Tumblr, will collaborate with the program and the media center to help shape the curriculum.