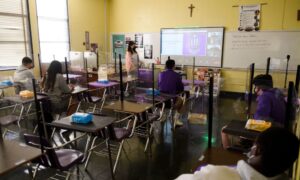 NEW YORK—Children from all five boroughs of New York City departed from the Port Authority Bus Terminal for special summer vacations in Massachusetts, Vermont, and Connecticut. Volunteer host families of The Fresh Air Fund in these states will welcome the 86 urban children and provide them with summer vacations in rural areas.

Three thousand children from low-income communities in New York City have the opportunity to take country trips, and vacations in camps, or with host families this summer, thanks to The Friendly Town Program run by The Fresh Air Fund. The Fresh Air Fund is a nonprofit agency established in 1877 by Reverend Willard Parsons, who was a minister of a small rural parish in Pennsylvania. Knowing that crowded urban life was the cause of tuberculosis for many New York children, Parsons asked his parishioners to be volunteer host families for short country stays, thus, the The Fresh Air Fund was founded. Today, the agency arranges several programs funded primarily by donations. The principle is to give New York children who grew up in towering apartment buildings a chance to enjoy more outdoor play, while getting acquainted with new families and friends.

“I think the programs are amazing. Many of them are invited by the same host families they have been with before. The children will go fishing and swimming with their host families,” said Jenny Morgenthau, executive director of The Fresh Air Fund.

The 86 children, who belong to the first groups of travelers participating in this year's summer program, are from age 6 to 18. While some have been on trips with the agency before, a good number of them are taking their first trip with The Fresh Air Fund. Employees and volunteers from the agency helped to arrange their luggage before finally waving goodbye at 11.30 a.m. According to an official statement, 5,000 young people from New York City are expected to participate in summer as well as year-round programs hosted by the The Fresh Air Fund in 2010.

Amir Shabazz from Brooklyn, who will be staying with a new host family in Dorset, Vermont, until July 7, told The Epoch Times that he is very excited about the vacation.

Wen Yu, whose 6-year-old sister is going on her Friendly Town Program trip for the first time, said that she hopes her sister can take a break from the city, and enjoy the time she gets to spend in the countryside.