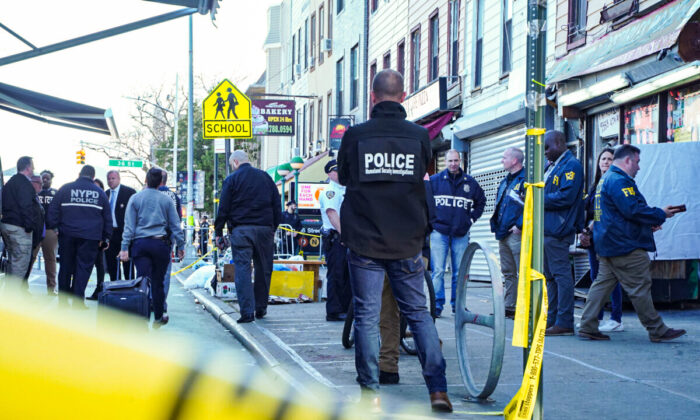 Amid soaring serious crime in NYC,  an unspecified number of police officers that work in the city had their vaccine exemptions denied on April 12, the same day that a mass shooting occurred on a Brooklyn subway train.

These police officers were given seven days to get the jab or they will be placed on leave without pay.

Many of them are resigning so that they can keep their pensions, police officers told The Epoch Times.

New York City mayor Eric Adams announced in February that about 1,400 city workers were fired for failing to comply with the city’s vaccine mandate.

“The city’s been kicking around a number of approximately 1,400 terminations of city workers. That number is inaccurate. It’s a misrepresentation of the truth. The number is far greater than that. The truth is that the city is ‘not terminating anybody’ because they are putting us in a position to coerce us into resignation,” Nicholas Smith, a law enforcement officer in New York City told The Epoch Times.

“And at that point …  we aren’t considered terminated employees. By their standards, we voluntarily resigned. But there’s nothing voluntary about what we’re dealing with. I only want to work for the people in New York.”

Smith submitted a reasonable accommodation request on sincere religious belief grounds in October last year, which was denied a couple of weeks before Christmas.

He then filed an appeal which was denied on April 12.

“That appeals determination states that I have seven days to submit proof of vaccination or I will be placed on leave without pay and ultimately terminated,” he said.

“I feel as though injustice is being done on myself and other members of this city. I understand the perspective that people may feel as though as a civil servant it’s my duty to disregard my beliefs in service of the city, but I’m here to offer another perspective that it’s my duty to protect the civil liberties of New Yorkers as a civil servant. And that’s what I’m trying to do here. I’m trying to protect myself, my family, and New Yorkers that I serve,” Smith said.

He understands that the mayor, members of the public, and those who are reviewing the accommodation requests are in a difficult position.

“The city is talking about bolstering the presence of law enforcement in public settings to protect the people of New York, yet at the very same time at least 180 received notification that they would be terminated in approximately seven days.”

“I didn’t even get to speak to a real live person to express my sincerity on this topic,” Smith said.

He is happy that the NYC athletes and performers got exempted from the vaccine but feels terrible for the employees of the same organizations that work in the same buildings as the performers and athletes, and ironically are not able to do their jobs.

“It’s without a doubt, a hypocritical policy and it goes beyond the fact that those individuals are not in close contact with the stadium because as we saw, Kyrie Irving was able to walk amongst the fans in the Barclay Center, despite not being allowed on the court.”

On March 26, Adams denied accusations of being lobbied by economic groups to nullify the mandate for athletes.

During an appearance on CBS New York, Adams said “If you love law enforcement the way I love [it] you’re not gonna allow a COVID shot to get in the way.”

In a lawsuit filed by New York’s Police Benevolent Association on behalf of its members against the city, it states that “Approximately 6,500 NYPD employees filed accommodation requests,” and that “The City has terminated more than 1,400 employees pursuant to the Termination Requirement, which includes not less than 36 NYPD personnel, including police officers.” (pdf)

Arthur Roldan told The Epoch Times that he is an NYC Police Officer who has been working with them for 16 years and is pending termination for rejecting the vaccine.

“They will say they didn’t fire cops and that it is our choice to quit, retire, or be fired. [But] the reality is the majority are vesting out (early retirement only partial pension) under duress to protect their pensions and benefits,” Roldan told The Epoch Times via email.

“It’s indirectly firing us by coercing us. When it comes to keeping the smaller partial pension and benefits or getting fired and losing everything, most cops will choose to leave early on their own,” he said.

“There will be an impact and an extra increase in crime because of the shortage in manpower. Crime rates are drastically up and losing cops will not help lower that crime rate. Between the people vesting out under duress and you also have a huge post 9/11 class that’s eligible to retire.”

Carin Rosado, a 10-year NYC paramedic who was terminated on Feb. 11 for not taking the jabs, is thinking about seeking employment as an actress, to play as a paramedic.

In the beginning, she wanted some time to see if there were going to be any adverse reactions to the COVID-19 vaccines.

“I’m not anti-vaccines. I have all the vaccines from when I was a kid, obviously. So it wasn’t that, but as the mandate came down, and I saw the fear … the coercion, giving people money to get shots, telling people this is the only way they can keep their job—that pushed me farther and farther away from wanting the shot,” Rosado told The Epoch Times, almost crying.

Many nurses across the country decided not to take the vaccine, even if they had to lose the job they loved.

“I want people to know that we’re more than just our titles. You know, we are humans,” she further commented, “We are part of families. A lot of people did not realize that while everybody was on leave without pay, [we] weren’t allowed to work. So there’s no money coming in [from] any angle.”

Rosado has been applying to paramedic jobs but they have been asking for vaccination proof.

“At this point, I think I’m gonna start applying to acting jobs if I could act as a paramedic in the show. I guess I could work that way, right?” she said.

“If performers and entertainers can work let me work as an entertaining paramedic. Sounds like a joke, but if that’s the only way I could work, why not give it a shot, right?”

In November last year, FDNY members told The Epoch Times that manpower shortages were causing alarmingly low firetruck availability due to many of them being sent home without pay for rejecting the jabs.

“Mayor Adams has expressed a commitment to fairness and equality and the revitalization of our local economy. Yet, the question of when all of New York City’s essential workers can return to their respective arenas remains unanswered,” Matt Connor, a spokesperson for Bravest for Choice, said in a statement.

Joe Borelli, NYC Council minority leader said in a statement, “In the last two days, 375 NYPD more officers were denied medical or religious exemptions to our vaccine mandate, and there are 5,400 applications still pending. This is over 15 percent of the police department.”

The NYPD, PBA, SBA, DBA, and NYC Mayor’s Office did not respond to a request for comment.