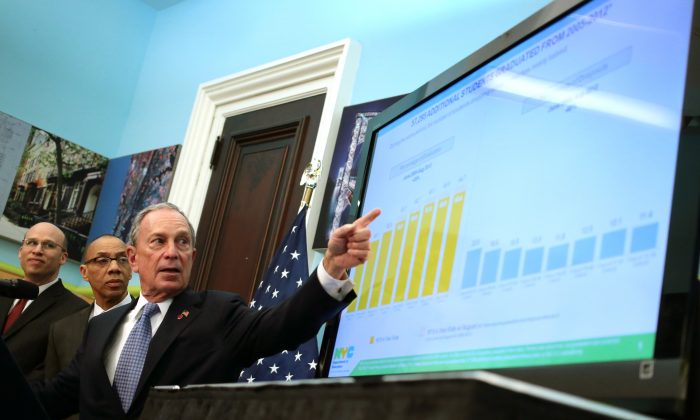 Mayor Michael Bloomberg gives a presentation on graduation rates for the class of 2012, while Schools Chancellor Dennis Walcott looks on, at Tweed Courthouse in Manhattan on June 17, 2013. (Edward Reed)
New York

Mayor Michael Bloomberg defended the numbers on Monday afternoon at Department of Education Headquarters saying the rates had flattened, but the standards had raised.

“Everyone predicted our graduation rates would fall precipitously and that did not happen,” Bloomberg said. “We have a much higher standard. It’s like comparing apples to oranges.”

Graduation rates would have been even higher at 66.1 percent if using the 2011 Regents exam requirements.

“I would rather our students in school and meeting a higher bar and graduating and preparing for colleges and careers than with the standards that existed before,” Schools Chancellor Dennis Walcott said. “Our students and staff have met that bar.”

Dropout rates were at 11.4 percent this past school year, a drop from 22 percent in 2005. Bloomberg credited keeping students in school and allowing them to graduate in five, or even six years with some of that decrease.

“If a kid drops out of school, the chances of him coming back are not great, and the chances of them ever getting the skill sets they need to share in the great American dream is minuscule,” Bloomberg said.

In 2005, when Bloomberg took over the school system, graduation rates were at 46.5 percent.

“As standards increase for students at all grade levels, we must continue to support the reforms that have enabled these gains and not turn back the clock on our students,” Walcott said in a statement.

“For some students, achieving higher standards takes more time—and I’m proud that more students than ever before are staying in school and graduating after five or six years.”

While touting his accomplishments, Bloomberg took the opportunity to knock the United Federation of Teachers Union (UFT), whom he has butted heads with over numerous issues, including the recent failed teachers evaluation contract, which cost the city $250 million.

“Any way you look at the last 10 years, our students have made tremendous gains, and they are making them despite every effort by special interest, like the UFT, to block our reforms at every step of the road,” Bloomberg said.

The mayor rattled off several proposals he made in his State of the City on Valentine’s Day of this year, including transforming schools into smaller schools or charter schools, and a teacher mentoring program, which Bloomberg claims were shot down by the UFT. Bloomberg said with such programs, more kids may have graduated.

“What a disgrace,” Bloomberg said. “Those students have suffered and they will probably never catch up.”

Next Administration
Bloomberg will leave office at the end of this year, but he said he hopes the next administration will continue in his footsteps. He had strong words for the mayoral candidates looking to change his policies in the name of politics.

“We have to do more of this,” Bloomberg said. “We would become the laughing stock of the country if you were to roll back everything that has worked so well.”

“The parents have to stand up and say, ‘you are not going to do that to my child. It may be good politics for you to get elected, but we are playing with my child’s life,’” Bloomberg said.

When asked by a reporter if the UFT endorsement should be enough for a vote against that candidate, the mayor paused, almost pondering the question before saying, “I don’t know if you have to worry about that. The last time the UFT endorsement got someone elected was better than two decades ago.”

Bloomberg said Mayor Dinkins was the last mayor to win with a UFT endorsement.

“It is almost the kiss of death,” Bloomberg added to laughs from the press corps. He added, “I don’t know what goes through voters’ minds, but if the UTF wants it, it aint’ good.”

“This city and its families can’t succeed when four out of ten high school students don’t graduate on time. Sending young people out into the world unprepared will only deepen the inequality that’s turning us into a Tale of Two Cities. Staying the course or making small adjustments won’t get us where we need to be—we need a game changer in education.

“My plan to provide truly universal pre-kindergarten and dynamic after-school programs through a tax on the wealthiest New Yorkers will provide the foundation young people need to finish school and succeed. Unless we get serious about making fundamental changes—and deliver the resources to accomplish them—we’re just perpetuating an unacceptable status quo.”

In a statement, UFT President Michael Mulgrew said, “Dozens of candidates in local and citywide elections have won with UFT backing in recent years, and many are seeking it this year, while running away from Bloomberg and his record. Right now most candidates would rather be the victim of zombie attack than get a Michael Bloomberg endorsement.”

This article will be updated as other candidates respond.