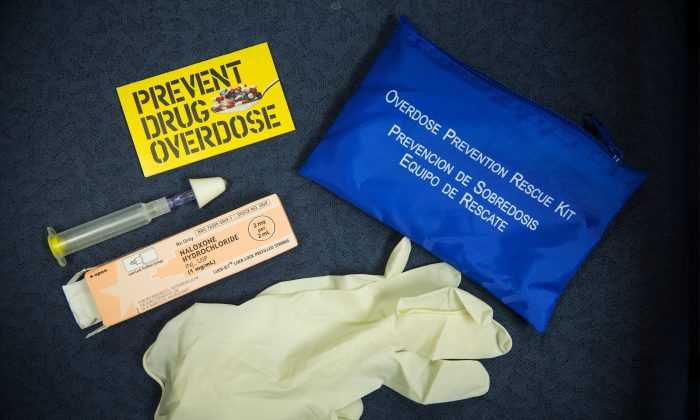 A kit of Naloxone, a heroin antidote that can reverse the effects of an opioid overdose, is displayed at a press conference about a new community prevention program for heroin overdoses in which New York police officers will carry kits of Naloxone, on May 27, 2014 in New York City.(Andrew Burton/Getty Images)
New York

About three fourths of all fatal overdoses in New York City are related to opioids—prescription painkillers, methadone, or heroin—and the number of fatal over doses has increased by 41 percent in the last three years.

The Health Department, on Tuesday, distributed 200 doses of the drug naloxone, which reverses the effects of a drug overdose if administered quickly after an overdose. Since 2010, over 25,000 naloxone kits have been distributed and at least 500 overdoses have been reversed with the use of the drug, according to city numbers.

“Naloxone is a life-saving tool and it should be used,” said Health Commissioner Dr. Mary Bassett in a press release. “On New York City’s first Overdose Awareness Day, I want to remind New Yorkers that fatal opioid analgesic and heroin overdoses can be prevented.”

According to a recent Health Department report, there has been an uptick in deaths of younger groups in more affluent parts of the city from 2010–2013.

To raise awareness, the Health Department is hosting training sessions at various clinics.

Opioid overdoses will usually involve slowed or stopped breathing, according to the Health Department.

Anyone who may know someone at risk of overdosing should call 311 to learn how to obtain a naloxone kit and get training to use it.