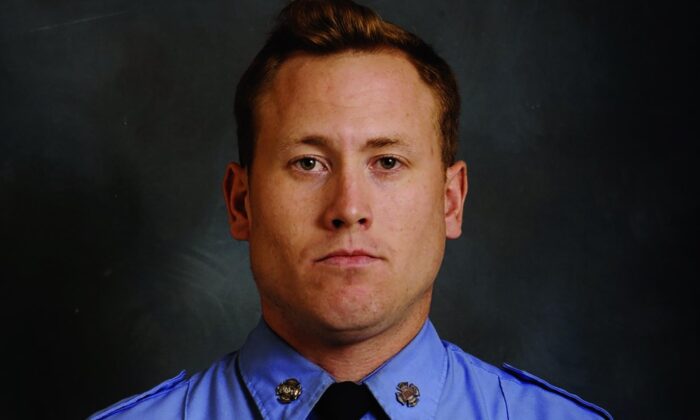 A 6-year veteran firefighter in New York and a civilian died on April 24 in a Brooklyn house fire that trapped several members of the fire department after the building’s ceiling partially collapsed, authorities said.

Timothy Klein, 31, responded within minutes to smoke reports at 108-26 Avenue N in Canarsie that quickly escalated to a three-alarm fire, the New York City Fire Department (FDNY) said in a statement.

“Conditions in the fire building deteriorated rapidly and the incident commander ordered all members from the building. At that time, a collapse occurred inside the building, injuring four members … who were inside at the time,” FDNY officials said.

Klein was trapped following the building collapse and succumbed to his injuries at Brookdale University Hospital Medical Center after fellow firefighters were able to remove him from the building.

In total, eight firefighters sustained non-life-threatening injuries in the blaze, either in the collapse or from burns. One resident also suffered minor injuries.

More than 130 fire department personnel were involved in the response, Newsday reported.

Laura Kavanagh, the acting commissioner of the fire department, said Klein’s family has a rich history of service in the FDNY. His father is retired FDNY Firefighter Patrick Klein.

“The Department is heartbroken today at the loss of Firefighter Timothy Klein, who died risking his life to save others,” Kavanagh said. “His family has a rich history of service in the FDNY, and he bravely followed in their footsteps.”

Klein is the 1,157th member of the FDNY to die in the line of duty and the second firefighter to die this year.

In February, Jesse Gerhard, a 33-year-old firefighter, was the most recent in the line of duty death after he collapsed at a firehouse while responding to a blaze in Queens.

Another person’s body was also recovered from the scene, an FDNY spokesperson said on April 24, The Associated Press reported.

Earlier, the department said a person was unaccounted for after the blaze, however, a medical examiner will need to confirm the identity of the person found in the building.

“New York City has lost one of its bravest today,” Adams said. “He lost his life doing the job we asked of him every day—bravely fighting to save others from fire. We pray for his family and his fellow firefighters during this terribly painful time.”