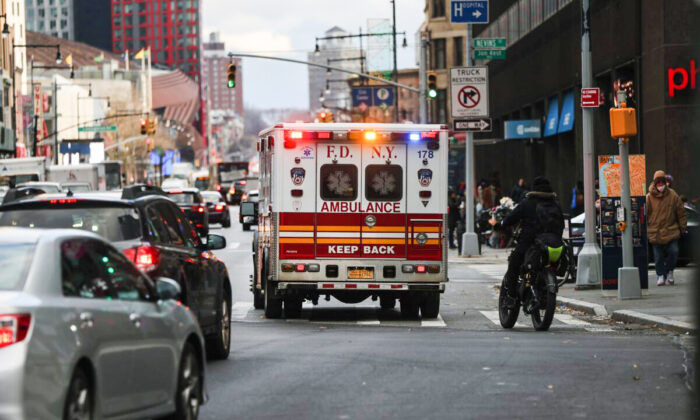 New York City residents have increasingly succumbed to overdoses on synthetic opioids such as fentanyl. These deaths have soared by more than 55 percent in the 12 months ending March, compared to the same period the year before.

That means 1,778 died of this cause in the city by March 2021, compared with 1,145 by March 2020, based on estimates from Centers for Disease Control and Prevention (CDC) that account for missing data.

The period aligns with the months of severe measures imposed by the city and state to curb the spread of the CCP (Chinese Communist Party) virus.

The city has struggled with an opioid epidemic for years, responding by expanding access to treatment, drugs such as methadone and buprenorphine that make withdrawal easier, as well as overdose reversal drug naloxone.

The state recently decriminalized possession or sale of hypodermic needles and syringes. It then ordered the NYPD to stop intervening when they see somebody with a needle, “even when it contains residue of a controlled substance,” the order said, according to the New York Post.

Mayor Bill de Blasio has rarely addressed the issue in recent months, based on a review of his remarks on the City Hall website.

“It’s very, very troubling,” he said when asked a related question during a media conference call in March. “We’re putting a number of measures in place to address it.”

“I do believe as the city recovers, as the life of the city goes back to something much more normal, it’s going to help. But we also understand that opioids are extraordinarily dangerous and that we need to put additional measures in place.”

Fentanyl, a highly addictive pain killer roughly 50-100 times stronger than morphine, is so potent that one can overdose by touching it as it can be absorbed through the skin. The majority of it is made in China or synthesized from precursor chemicals supplied from China. It’s then smuggled to the United States either directly or via the southern border. Drug cartels and dealers have been known to mix it into heroin to increase the potency of the street drug. In recent years, cartels have been pressing fentanyl into small blue pills stamped “M30” to resemble the color and markings of prescription opioid painkiller oxycodone.

More than 9.5 million counterfeit pills containing fentanyl and methamphetamine had been seized so far in 2021—more than the total seized in the previous two years, according to a public safety alert on Sept. 27 by the federal Drug Enforcement Agency (DEA).

“DEA laboratory testing reveals a dramatic rise in the number of counterfeit pills containing at least two milligrams of fentanyl, which is considered a lethal dose,” the alert said.

Breitbart reported in 2019 that Mexican authorities seized a shipment from China carrying 25 tons of fentanyl—enough to kill every human on the planet.