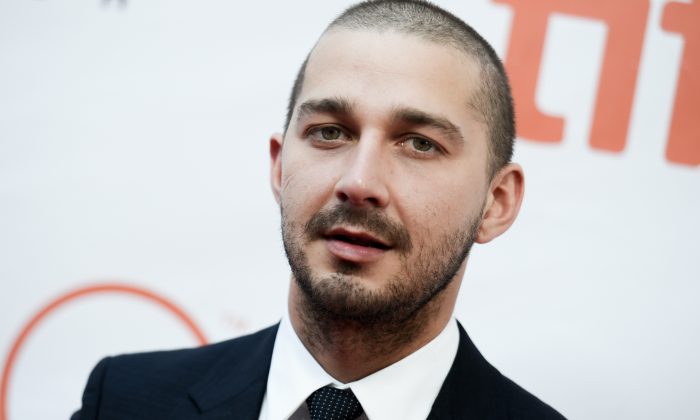 FILE - In this Sept. 15, 2015 file photo, actor Shia LaBeouf attends a premiere for "Man Down" on day 6 of the Toronto International Film Festival at Roy Thomson Hall in Toronto. LaBeouf invited his fans to watch all the movies hes ever made with him during a three-day (and two-night) marathon at a Manhattan theater. LaBoeuf basically took over the theater but wasnt speaking to his fans, according to people coming out. (Photo by Richard Shotwell/Invision/AP, File)
Entertainment

NEW YORK—Why did actor Shia LaBeouf invite his fans to watch all the movies he’s ever made with him during a three-day (and two-night) marathon at a Manhattan theater? Or to watch him watching via livestream, witnessing the drama of him occasionally stroking his beard, sipping from a cup or scratching his nose?

Probably the best explanation is: Just because.

And that’s pretty much why Alex Martin, a senior at New York University, was waiting on line — for what was likely to be hours — to get inside.

“Just for the experience,” Martin explained with a smile. “Just to say I did it. Not necessarily to watch a movie of Shia LaBeouf. You know, just to say I was here.”

Although Martin, who’s majoring in public health and sociology, used to love LaBeouf when he was a child actor, he and his friends waiting with him Wednesday afternoon clearly now see him as a perplexing, if interesting, celebrity known for sometimes very erratic behavior. “Lots of alcohol,” Martin noted.

Austin Reardon, also an NYU senior, said he was there “because I am a big fan of his public persona over the years.” He came to the Angelika Film Center, right by the university, because “it’s entertaining to watch online, but I would like to be a part of it in person.”

Though most of those waiting on line, which stretched about a city block long, appeared to be college age, not everyone was. Attorney McKinney Brown, 26, had the day off from work and “thought it would be a fun experience.” He didn’t know precisely which movie he’d be seeing; his favorite, he said, is “Lawless.”

“Shia does all sorts of performance art,” Brown said. “I thought it would be a fun thing to do just to experience it.”

LaBeouf basically took over the theater, letting fans in for free, but wasn’t speaking to those who managed to get in, according to people coming out. There were five-minute intermissions between films.

“He was completely silent,” said Michelle Calicchio, a senior at Ramapo College, who arrived early in the morning and emerged from the theater at about 4 p.m., having spent most of her time waiting (newcomers were admitted only when someone exited the theater, and people could stay inside as long as they wanted.) She felt that LaBeouf was wordlessly critiquing his own work.

Back on line, David Andre, an actor and recent NYU graduate, was comfortable with the fact that he probably wouldn’t get to talk to LaBeouf or even see his face.

“My phone died, so I won’t even get a photo,” he said with a grin. And he continued to wait.