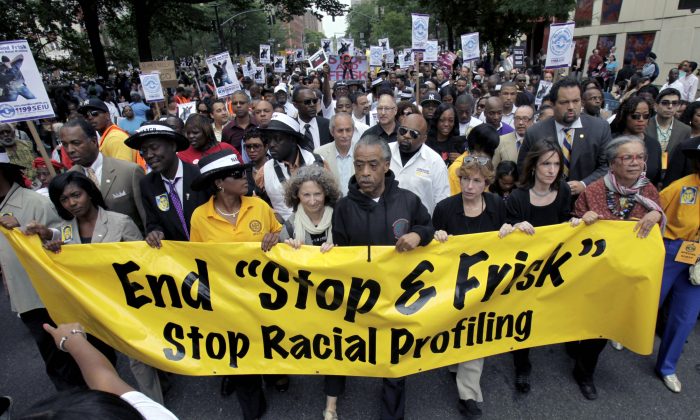 De Blasio was a sponsor of the law as the city’s public advocate under the Bloomberg administration. Intro. 1080 was passed by City Council on Aug. 22, 2013. Former Mayor Michael Bloomberg challenged it in court the following month claiming it would make it harder for police to do their jobs, resulting in a likely increase in crime.

The law allows people who feel they were racially profiled by the NYPD under it policy of stop, question, and frisk, to take their cases to state court. Previously, such cases could only go to federal court.

Bloomberg was a staunch defender of the use of the police crime-fighting tactic of stop and frisk, where people are stopped on reasonable suspicion, questioned, and in some cases frisked. Opponents charge that it can easily be used as a guise for racial profiling.

“This law protects individuals in our communities against bias-based profiling,” said de Blasio in a statement.

City Council Speaker Melissa Mark-Viverito, Jumaane D. Williams, and Brad Lander—also sponsors and leaders on this issue—said the decision will help mend fences between the public and the police.

“The goal of this legislation is to secure policy changes at the NYPD to address issues of bias-based profiling,” according to a joint statement from the council members.

Those who do go to court under the law’s provisions will only be able to make claims for what’s call injunctive or declaratory relief. That includes changes to NYPD policy and practices. But those claims won’t lead to awards for monetary damages by the court.

“Racial profiling is a disingenuous charge at best, and an incendiary one at worst, particularly in the wake of the tragic death of Trayvon Martin,” wrote Kelly in an op-ed in the Wall Street Journal in July 2013.

“The effect is to obscure the rock-solid legal and constitutional foundation underpinning the police department’s tactics and the painstaking analysis that determines how we employ them.”

The NYPD is now under the leadership of Police Commissioner William Bratton, who has pledged to repair relations between police and NYC communities.

But on March 6, the Policeman’s Benevolent Association (PBA), which represents police officers, said it will continue to fight against a law that they feel “penalizes” NYPD officers.

“The administration has expressed its desire to change the policies that led to issues in our communities, eliminating the need for the law in the first place,” said the PBA in a statement Wednesday.

The organization added that it will continue its own litigation “to protect our police officers and the city from the effects of this misguided law.”

The mayor said in his statement that the city will set “fair and effective standards” that aim to prevent bias in all forms.