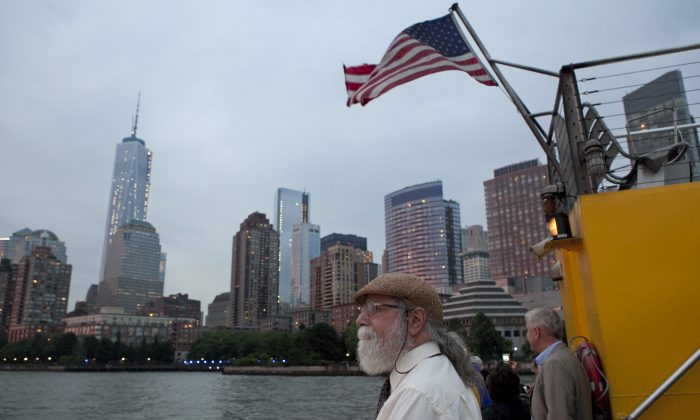 NEW YORK—As the former supervisor of New York Harbor, John Boule knows something about dealing with natural disasters, and their aftermath.

“It’s almost like being in war—trying to fight the after effects of a hurricane,” said Boule while standing aboard a boat in New York Harbor. He was supervisor from 2009 to 2012.  Boule left his post one month before Hurricane Sandy hit, but he managed hurricanes Ike and Irene.

Boule said as part of the Army Corps of Engineers under Federal Emergency Management Agency (FEMA) he helped pump out tunnels and build temporary housing for evacuees after the storms.

Boule was a guest speaker on an educational tour with Hidden Harbor Tours Tuesday, June 18. The company is running a three-part series, Beyond Sandy, to explore potential options for global warming and sea-level-rise protection along New York’s 500 miles of waterfront. Boule’s comments focused on potential.

“This is a marathon,” said Boule about waterfront rebuilding, protection and preparation for the next storm. “We will be talking about this for years.”

Boule’s company, Parsons Brinckerhoff, was involved in preparing the massive, 438-page report by the mayor’s office, “A Stronger, More Resilient New York” that was released June 11. Some of the key recommendations in the report, which Boule referred to as “layered,” focus on unique plans tailored for all five boroughs.

A lot of talk during the tour, which included guest speaker Capt. James DeSimone, chief operating officer of Staten Island Ferry, was about how the harbor might be improved.

Specific suggestions include raising the Bayonne Bridge roadway between New Jersey and Staten Island to allow for larger ships to pass through, and installing a storm surge gateway under the Verrazano-Narrows Bridge.

Neither are exactly new ideas, but they have newfound merit as federal money starts coming in for rebuilding and upgrades after Sandy.

During a 2009 international infrastructure seminar, design, engineering, and consultancy firm Arcadis proposed a barrier installation just north of the Verrazano. The barrier would be a pair of rolling or sliding sections of gates with an 870-foot opening in the center.

Boule cautioned that the big picture needs to be considered.

“The idea of implementing change is very challenging,” he said, adding that what’s really needed is a regional plan.

Taking a wider, regional approach that includes New York, New Jersey, and Connecticut, is a hard sell though. Especially when the major cash cow in the equation is the Port of New York and New Jersey.

The port is the third largest in the world, and 35 percent of Americans are served by it in some way. In 2011 it was the source of 280,000 jobs and generated almost $11.6 billion in personal income, $37.1 billion in business income, and $5.2 billion in tax revenue, according to the Army Corps of Engineers. Bayonne says that kind of economic driving force is critical.

“Without economic prosperity, you can’t afford to do anything else,” he said.