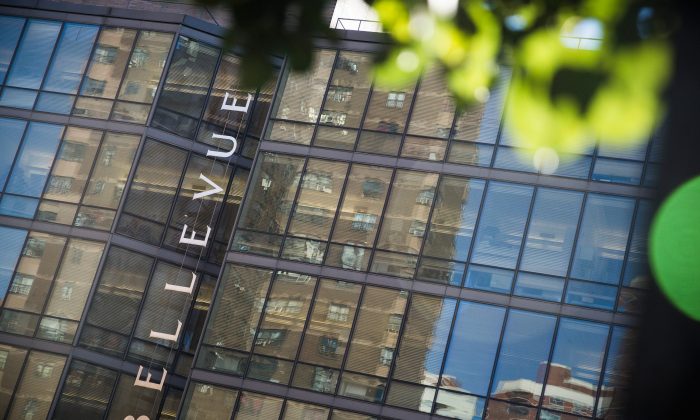 Bellevue Hospital in New York City on Oct. 27, 2014. Dr. Craig Spencer, a resident of New York City and a member of Doctors Without Borders, was admitted to Bellevue Thursday, Oct. 23, 2014 and was diagnosed with Ebola. He has been upgraded from serious but stable condition to stable condition, hospital officials said Saturday, Nov. 1, 2014. (Andrew Burton/Getty Images)
New York

NEW YORK—A New York doctor who became infected with Ebola while treating patients in Guinea has been upgraded from serious but stable condition to stable condition, hospital officials said Saturday, marking progress in a case that intensified the debate over how to treat health workers returning from West Africa.

The New York City Health and Hospitals Corporation issued the upgrade for Dr. Craig Spencer nine days after he was brought to the hospital after reporting a fever.

The agency, which runs Bellevue Hospital Center, where Spencer has been undergoing treatment, said he would remain in isolation and receive full treatment to recover from a virus that has killed nearly 5,000 people in West Africa.

Spencer, the only confirmed Ebola patient in New York, is a 32-year-old Doctors Without Borders physician who had returned from Ebola-plagued Guinea less than a week before notifying authorities Oct. 23 that he had a fever.

The HHC has said Spencer is receiving antiviral and plasma therapies that were effective in treating Ebola patients in Atlanta and Nebraska. Spencer’s quarantined fiancée and two friends remain symptom free.

City health officials also announced Saturday that they would no longer restrict the daily movements of one of the individuals who had been quarantined because of contact with Spencer. They said the person, who was not identified, would be assessed twice a day by Health Department staff.

The agency said in a statement that health officials reconfirmed that “the individual’s exposure was not consistent with how Ebola is transmitted.”

After Spencer was hospitalized, city health officials reassured the public that there was almost no chance strangers were infected by a virus that must be transmitted through bodily fluids.

Still, some worried after hearing that Spencer took three subway lines and a cab, went jogging, walked the High Line parkway, and visited a coffee stand, a sandwich shop, and a bowling alley.

His case led the governors of New Jersey and New York to declare a mandatory quarantine for travelers exposed to Ebola in West Africa.

The orders drew a backlash from the White House and some in the medical community, most notably Kaci Hickox, a nurse from Doctors Without Borders who called her treatment “inhumane” after she became the first person quarantined under the orders when she arrived at a Newark, N.J., airport after treating Ebola patients in Sierra Leone.

After testing negative for the virus, she was allowed after a few days to go to Maine, where Gov. Paul LePage sought a court order to ban her from crowded public places and require her to stay 3 feet from others until the 21-day incubation period for Ebola expired Nov. 10.

Maine District Court Chief Judge Charles C. LaVerdiere ruled Friday she must continue daily monitoring of her health, but he ended her isolation and movement restrictions, saying she has no symptoms and is thus not contagious.