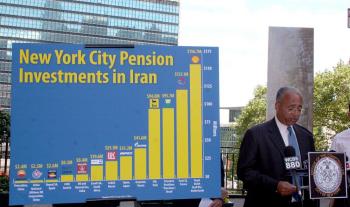 NYC to Divest of Companies With Ties to Iran

biggersmaller
Print
NEW YORK—New York City Pension Funds are set to begin divestment of its shares in two companies with ties to Iran.

The divestment is of stock from two companies, Oil and Natural Gas Limited and PetroChina. The stocks are valued at approximately $10.8 million according to a press release from the office of Comptroller William C. Thompson.

“Investing in Iran is not only immoral, it is also bad business,” said Congressman Anthony Weiner in a press conference Sunday. Weiner added that all New York investments would be more secure after divestment because an empowered Iran would make the world less safe and the economy more volatile.

Weiner’s office issued a report about the situation in Iran, saying that Iran “has expressed its goal of developing a nuclear program and has made aggressive and destabilizing comments against allies of the United States in the region.”

Senator Charles Schumer said at the press conference, that the only real way to weaken the Iranian regime without military force, “Is to squeeze them economically.” Schumer also supports a boycott of companies that sell technology used by the Iranian government to interrupt Internet and cell phone connections.

“Iran funds terrorism. They send weapons and resources to attack Israel. If these businesses do not stop supporting countries blocking peace in the Middle East and advocating the annihilation of Jews on their own, then we’re are going to crack down on them.” Said Weiner in a press release from Thompson’s office.

Thompson also suggests that the Trustees of five New York pension funds phase out stocks of eight other energy companies with significant investment in Iran.

The stocks of these companies are valued at more than $141 million. Thompson said at the press conference that the phase out will happen as quickly as possible and that congressional economic studies indicate that investors will not lose money in the short term.

Currently 16 states including New York have begun to divest of stock in companies linked with Iran.

Comptroller Thompson said that he hopes the divestment will send the message to the world to get out of Iran.