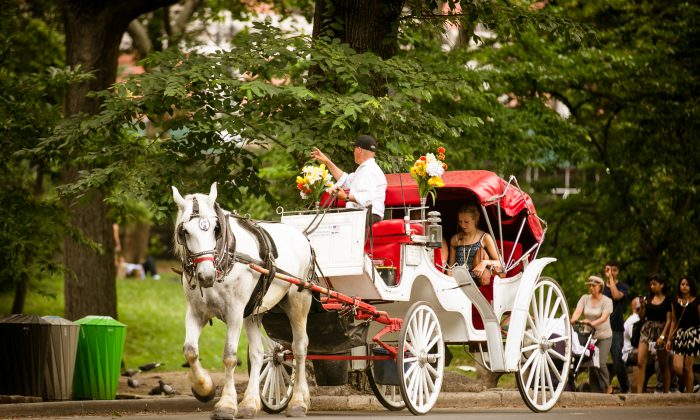 NEW YORK—New York City officials announced Sunday, Jan. 17, that a deal has been reached to keep some horse-drawn carriages in Central Park and build a new in-park stable for the horses rather than ban them altogether.

“We are pleased to have reached an agreement in concept on the future of New York’s horse carriage industry,” Mayor Bill de Blasio said in a joint statement with City Council Speaker Melissa Mark-Viverito and the Teamsters union, which represents the carriage drivers.

The horses currently live in private stables on Manhattan’s West Side, and animal rights advocates have been fighting to get the carriages banned entirely, calling it inhumane to keep horses in loud, car-clogged Manhattan. The Democratic mayor also pledged when he was sworn in two years ago to end the popular carriage rides through the park. But that was met with public and political opposition.

Will There Be Horse Carriages in Central Park by 2016?

City officials on Sunday said the deal would eventually reduce the number of licensed horses from about 180 to 95 when a permanent home is built for them in Central Park by Oct. 1, 2018. The agreement also limits the operation of horse-drawn carriages, with the exception of travel to and from their existing stables to Central Park beginning June 1.

Once the stable is complete, all travel and operations will be inside Central Park, providing space for 68 carriages and 75 horses, officials said. Horses not at work must be on furlough outside the city.

Related Coverage
Horse-Drawn Carriages: Which Side Are You On?

The number of hours per day that a carriage may operate will be limited to 9 hours in any 24-hour period beginning Dec. 1, and carriages will be able to charge an extra $5 for trips after 6 p.m. between Nov. 15 and Jan. 5, and on Valentine’s Day or Easter, officials said. Also, pedicabs will not be permitted to operate in the park south of the 85th Street Transverse, beginning June 1.

As news emerged last week of a possible agreement, Elizabeth Forel of the Coalition to Ban Horse Drawn Carriages said she remained opposed to any plan that does not ban carriage horses altogether. She also questioned whether it would be proper to house horses belonging to private businesses in the public park.

“What right does Mayor Bill de Blasio have to take public land and build a stable for private use?” she asked.

The move to a park stable would address one complaint from animal welfare activists: that the horses were in danger every time they made their daily walks from their staging area at the south end of the park to the urban stables where they now sleep at night.

Central Park already has a stable, once used by a city equine unit and now used for storage; it was not clear whether it could be repurposed. Also unclear is whether the deal, which must be approved by the City Council, would include any compensation for carriage drivers who lose their jobs.

“Working out the logistics of this agreement will be key in reaching an outcome that is suitable to all parties involved,” Council members Ydanis Rodriguez and Daniel Dromm said in a statement Sunday.