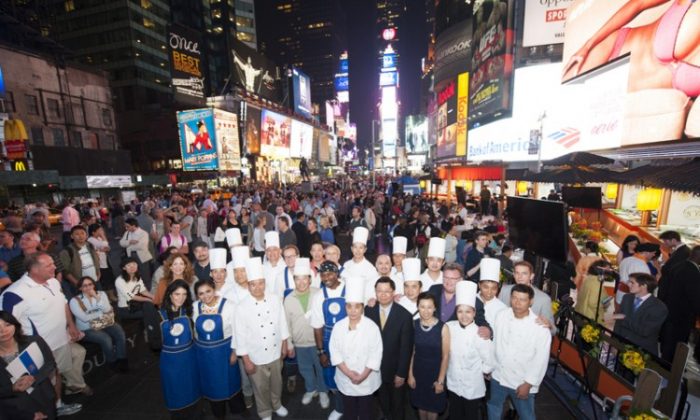 NEW YORK—In the heart of dazzling Times Square, the best of dozens of competing chefs rejoined on Friday for the final round in a world-class cook-off challenge, competing for the title of Best Chinese Chef.

Upon winning, Chef Chen said the most important thing for him was not the award itself, but learning new things and, in the process, discovering any shortcomings. He said, “It was not just an opportunity to advance one’s skills, but also one’s character and attitude.

“If one wants to cook good food, one first has to be a good person.”

Chef Chen specializes in Sichuan cuisine, one of the five cuisines of China included in the competition. The other four cuisines are Shandong, Cantonese, Huaiyang, and Northeastern.

Along with Chef Chen, 16 other chefs won awards and honorary mentions.

Most of the contestants have dozens of years of experience; accordingly, the judging process was done very carefully. Given the difficulty of judging and the high level of competitors, the competition’s host, Dan Chen, said he didn’t wish to be on the panel of judges “because it’s so hard to decide who will win.”

Head judge, Chef Qu Yuqiang, said that while cooking in the competition, contestants should not be in a hurry, but instead be calm and prudent. “If a chef cooks so well he can bring the dish alive, there is certainly something beyond the techniques. It is a mentality of wisdom.”

The cooking vessels used in the competitions are round-bottomed, deep ones made of iron; the kind that professional Chinese chefs use. The wok, which is the Cantonese word for cooking pots, is used in a variety of techniques, including deep-frying, stir-frying, poaching, searing, stewing, and many more styles.

To be able to use just one vessel for many cooking styles, chefs have to master many skills and techniques; one of them is the “non-sticky iron wok” style.

“Usually a chef lets the wok heat up while cutting the ingredients, sometimes for as long as five minutes. Then cold oil is poured in. The point of putting cold oil into a very hot wok is so that the food will not stick onto the surface of the wok,” said Dan Chen.

The culinary competition, hosted by independent Chinese-language TV network New Tang Dynasty, is one of a series of different competitions designed to bring back traditional Chinese culture, something that was once almost destroyed by the Communist Party in China.

Prior to the final round of Friday’s culinary competition, two preliminary rounds were held. One took place the day prior in Times Square, specifically for contestants in North America, and the other one in Taipei, Taiwan, which was held in August.

Alongside the Times Square competition, NTD also hosted The Emperor’s Banquet on Thursday night. Funds raised by the banquet went to a joint scholarship with the James Beard Foundation, which benefits underprivileged students interested in Chinese culinary arts.

Although many have eaten Chinese food, authentic Chinese culinary food arts and techniques from the various regions are not as familiar.