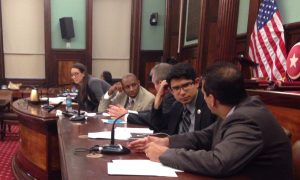 NEW YORK—Extending unemployment insurance benefits, keeping the city’s public housing in a state of good repair, and strengthening gun laws—these were among the top priorities listed by the New York City Council for the legislators in Congress.

The council’s federal agenda for 2014, released on Tuesday, stuck to a progressive line, with several priorities focusing on unemployment benefits, federally funded housing programs, food stamps, and immigration reform. The agenda covered a range of issues including housing, transportation, and public safety.

“While these priorities focus primarily on New York City, many of them would be of great benefit to cities and metropolitan regions across the U.S.,” the agenda states.

In line with work being done by the de Blasio administration, the Council supported several bills that would help Superstorm Sandy victims fund home repairs and receive reimbursements.

The Council is also asking Congress to fully find the New York City Housing Authority (NYCHA) so it can keep its buildings in a state of good repair. According to the agenda, the city has lost over $1 billion in funding since 2001, mostly because the federal government has not been funding NYCHA according to an established federal formula. NYCHA public housing is home to over 400,000 New Yorkers.

Extending the unemployment insurance program is also among the priorities. The federal government extended unemployment insurance benefits from 26 to 99 weeks during the recession in 2008, but the benefits have been cut back down to 73 weeks last year. The City Council is now asking Congress to pass a bill that would provide $9 billion to unemployed families who are looking for work. The average benefit was about $300 a week between 2010 and 2012.

The Council is also backing a comprehensive immigration reform bill introduced by New York Senator Charles Schumer. That bill would give immigrants who are in the country illegally a pathway to citizenship, among other provisions.