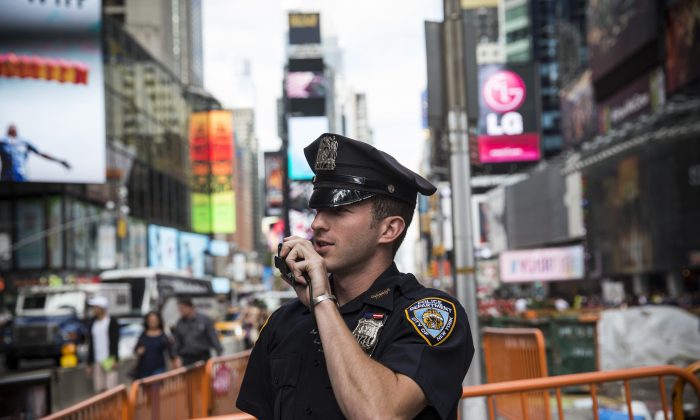 NEW YORK—The city’s police union bristled in an open display of disapproval to two City Council bills introduced on Thursday that will make significant changes to the police department’s operations if passed.

One bill would prohibit police officers from using chokeholds and charge officers who violate the law with a misdemeanor. The other would require police officers to ask for consent to search an individual.

The police union president Patrick Lynch said in a statement: “These proposals will endanger both the police and the public alike. The negative anti-police message that this out of control City Council consistently sends is a disincentive to pro-active policing that will leave cops standing on the corner like potted palms.”

At a rare public appearance to address media questions on Thursday, Lynch accused the City Council of trying to gain public attention by stoking anti-police sentiment. “This all about standing on the steps of City Hall and having a press conference,” he said. “This is the City Council trying to pass legislation that absolutely solves nothing and there’s no problem to solve.”

The City Council bills arrive amid a growing wave of public dissatisfaction with the NYPD’s policing methods, particularly after police officers were caught on video camera this July restraining Staten Island man Eric Garner with a chokehold maneuver, leading to his death.

In the video, Garner, who was being arrested for selling untaxed cigarettes, is heard shouting “I can’t breathe” several times as officers wrestled him to the ground.

The use of a chokehold—where a police officer wraps his arm around the suspect’s neck—was banned from the police department in 1993. But the NYPD did not follow its own department rule and failed to discipline officers who used the chokehold, according to a recently published study by the Civilian Complaint Review Board, the city’s watchdog agency in charge of investigating public complaints of police misconduct.

After Police Commissioner William Bratton took over the department this year with a promise to crack down on low-level, quality-of-life criminal offenses, New York residents, civil rights advocates, and community groups also connected the Eric Garner incident to a broader pattern of discriminatory policing practices that disproportionately target people of color. Garner was African-American.

The City Council bill, introduced by Council member Rory Lancman, would make chokeholds a crime punishable by up to one year imprisonment, or a fine up to $2,500. “Although chokeholds have been banned as a matter of NYPD internal policy for over 20 years, their use still remains prevalent,” said Lancman in a statement.

“With this bill, we make chokeholds not merely a violation of NYPD policy, but a crime, reflecting the inherent danger which chokeholds present to our city’s public safety,” he said.

Commissioner Bratton announced at a City Council hearing in September that all police officers will now undergo training on how to restrain people who resist arrest without physically harming them.

When Lancman asked Bratton at the hearing whether he’d support legislation that prohibits chokeholds, Bratton responded in the negative, saying the department policy was sufficient to prevent their use.

The mayor has expressed a similar position, noting that police officers should be given the option to use the chokehold during a life-threatening encounter. “There are some exceptional situations, and I want to respect our men and women in uniform who may be put into a life and death situation, literally one-on-one, them and a perpetrator who could literally mean to kill them, and they have to defend themselves—and that might involve a chokehold,” the mayor said during a press Q-and-A on Wednesday.

To allow for officers to use such discretion, Lancman included a separate piece of legislation, called the Proportionate Policing Act. Lancman’s spokesman Ari Saati explained that the bill will let officers use force, other than the chokehold maneuver, to protect themselves during a life-threatening situation—provided it is appropriate to the level of threat.

On the same day, Council member Ritchie Torres introduced the “Right to Know Act,” which will require police officers to identify themselves and the reason they stop an individual for questioning. In the case when an officer does not have reasonable suspicion of criminal activity, a search warrant, or intent to arrest, the officer will have to explain to the individual that they have the right to not give consent to such a search.

That right is currently protected under the constitution, said New York Civil Liberties Union Executive Director Donna Lieberman, at a press conference outside of City Hall on Thursday. The bill will simply allow officers to inform New Yorkers they interact with that they have such a right.

Torres said he drafted the bill as an effort to repair relations with police in communities—particularly of color—where residents have grown distrustful due to past stop, question, and frisk police practices. “We cannot improve police and community relations without first improving the on-the-ground interactions between police and civilians,” he said.

Council member Donovan Richards recalled an incident five years ago when he was buying groceries at night, near a building that was on fire.

A police officer grabbed his arm and told him he was not allowed to walk out of the store. The officer also refused to give his name when Richards asked.

The bill will not restrict police officers’ authority to search suspects whom they believe are engaging in a criminal act. “We are not aiding and abetting criminals here,” Richards said. “We are saying for innocent people, young men and women of color, they have the right to just go to a store to grab some milk without being searched.”

The bill currently has 22 co-sponsors. But not all Council members were supportive of the bill. At Thursday’s City Council session, council members James Vacca and Eric Ulrich said police officers should have the discretion to interact with criminal suspects as they see fit.

CORRECTION: A previous version of this article misstated what the Proportionate Policing Act would allow. It would allow officers to use force, other than the chokehold maneuver, to protect themselves during a life-threatening situation—provided it is appropriate to the level of threat. Epoch Times regrets the error.