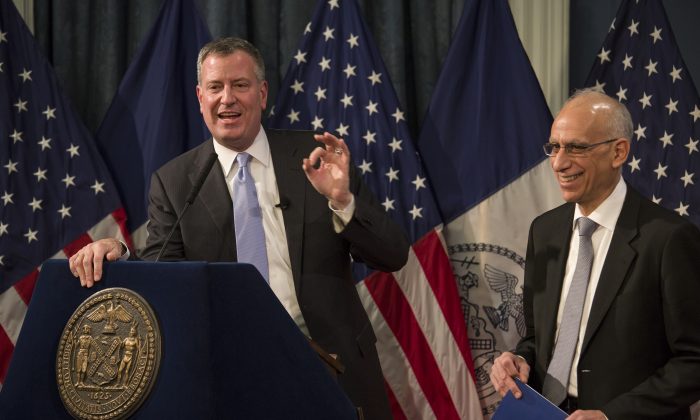 NEW YORK—Gone are the days with City Council fighting the mayor for months over crucial quality of life items that really only put a small dent in the city’s multi-billion budget.

Unlike the previous administration, no major cuts were made to core items like firehouses or libraries, which led council members to focus their attention on small line items rather than the large sums of money going to departments with little explanation.

The “springtime budget dance” the Council had to look forward to come March has given way to what council members say will be a process of transparency.

“We can now discuss whether an agency’s proposed budget truly reflects its mission and goals,” said Council Speaker Melissa Mark-Viverito. “This is a necessary and essential reform.”

Details addressing the union labor contracts of about 300,000 workers, what Finance Committee chair Julissa Ferreras called “the elephant in the room,” are still murky.

By the Independent Budget Office’s (IBO) most optimistic projections, the city would end the current fiscal year with a $2 billion surplus—about $250 million higher than the mayor’s estimate.

However, that projection does not include settling contracts with the city’s 152 labor unions, which Comptroller Scott Stringer called the city’s “Achilles heel.”

He urged the administration to settle the labor contracts before the budget passes, noting that lower-than-estimated Medicaid reimbursements and overtime spending could add up.

Fuleihan said the mayor will likely look to change work rules or trim health care costs for the mayor’s union workers, but added the administration was open to discussing with Council other ways to find savings.

“Without some framework for contract settlements in place, we could drive it to the end of the fiscal year, and the city will be forced to adopt an FY 2015 budget without knowing what the expenses are,” Stringer said.

The contract costs can come out to anywhere from $500 million to $7.1 billion based on IBO estimates.

However, IBO director Ronnie Lowenstein believes the $7.1 billion figure is an unlikely one. The IBO presented numbers for a variety of scenarios, like a one-time payoff.

Both the comptroller’s office and IBO projected higher tax revenues than the mayor did, but Stringer also cautioned against risks not noted in the mayor’s budget.

Besides the uncertainty of the labor contracts, the city has many other reasons to be cautious. The IBO’s projection of growth is based on the city’s ability to continue creating jobs, even with Wall Street not growing, and then there is the uncertainty of how much state funding the city will receive.

The city has also lost about $1 billion to the state over the last three years, Stringer says, because New York City was cut out of the state’s revenue sharing program.

In addition, the personal income tax for those earning over $500,000 annually, is something the mayor has included in the budget, but may not gain state approval to levy.

That tax is expected to garner $530 million (more by the IBO’s estimates) and pay for universal prekindergarten in the city.