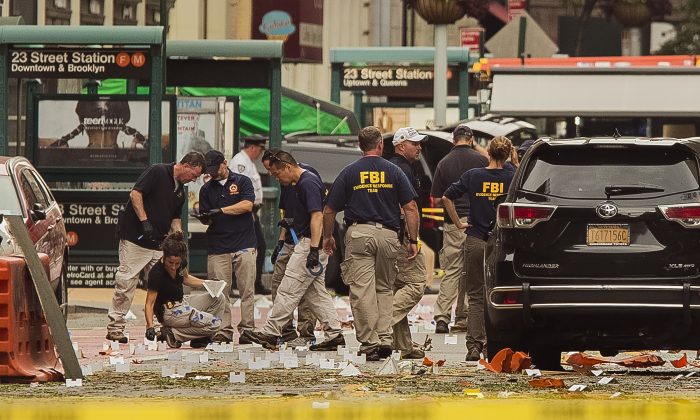 UPDATE: Federal prosecutors have charged Ahmad Khan Rahami with planting a series of bombs in New York and New Jersey, including one that injured 31 people when it blew up on a busy street.

NEW YORK—The FBI looked into New York bombing suspect Ahmad Khan Rahami two years ago after his father expressed concerns his son might be a terrorist, law enforcement officials said Tuesday. But the father later told investigators he just meant his son was hanging out with the wrong crowd, the officials said.

In any case, the FBI checked its databases and found nothing connecting Rahami to terror groups, three law enforcement officials said. The FBI review, which included interviews with Rahami’s father, was closed in a matter of weeks after the bureau came up empty-handed.

Also Tuesday, investigators disclosed that when Rahami was captured, he had a notebook with him that contained extremist ramblings.

One bloodstained page contained references to both Anwar al-Awlaki, the American-born cleric who was killed in a 2011 drone strike and whose preaching has inspired other acts of violence, and Nidal Hasan, the former Army officer who went on a deadly shooting rampage in 2009 at Fort Hood, Texas.

The information emerged as the younger Rahami, 28, was being held on $5.2 million bail, charged with the attempted murder of police officers in the shootout that led to his capture Monday. Federal prosecutors said they were weighing charges over the weekend bombings in New York City and a New Jersey seaside town that wounded 29 people.

Rahami’s father spoke with the FBI after Rahami was charged in 2014 with stabbing his brother, according to the officials, who were not authorized to discuss the investigation and spoke to The Associated Press on condition of anonymity. The officials said Mohammad Rahami later claimed he simply meant his son was hanging out with gangs and acting like a thug.

The disclosure of the father’s contacts with the FBI raises questions about whether there was anything more law enforcement could have done at the time to determine whether Rahami had terrorist aspirations.

That issue arose after the Orlando massacre in June, when FBI Director James Comey said agents had years earlier looked into the gunman, Omar Mateen, but did not find enough information to pursue charges or keep him under investigation.

In Rahami’s case, the law enforcement official said the FBI had opened up an “assessment,” the least intrusive form of an FBI inquiry. Justice Department guidelines restrict the types of actions agents may take; they cannot, for instance, record phone calls without obtaining a higher level of approval or developing more grounds for suspicion.

Rahami, a U.S. citizen born in Afghanistan, remained hospitalized Tuesday after surgery for a gunshot wound to his leg. He was captured in Linden, New Jersey, after he was discovered sleeping in the doorway of a bar.

His father told reporters Tuesday outside the family’s fried-chicken restaurant in Elizabeth, New Jersey, that he called the FBI two years ago. But asked whether he thought his son was a terrorist, the father said: “No. And the FBI, they know that.”

The younger Rahami was not prosecuted in the stabbing; a grand jury declined to indict him.

William Sweeney, the FBI’s assistant director in New York, said on Monday that the FBI had gotten a report of a domestic incident involving Rahami some time ago, but the allegations had been recanted, and “there’s nothing to indicate that currently he was on our radar.”

Nor were Afghan intelligence officials aware of either Rahami or his family, said Mohammad Masoom Stanekzai, director-general of the Afghan National Directorate of Security.

Late Sunday night, five explosive devices were discovered in a trash can at an Elizabeth train station. Investigators have not publicly tied Rahami to those devices.

Rahami provided investigators with a wealth of clues that led to his arrest just 50 hours after the first explosion, according to three law enforcement officials.

His fingerprints and DNA were found at the scene of the Manhattan bombing, they said. His face was clearly captured by surveillance cameras near the spot of the blast.

Electronic toll records show a car to which he had access was driven from New Jersey to Manhattan and back to New Jersey the day of the bombing, according to the officials, who spoke on condition of anonymity because they weren’t authorized to discuss the case.

The bombing investigation began when a pipe bomb blew up Saturday morning in Seaside Park, New Jersey, before a charity race to benefit Marines. No one was injured. Then a shrapnel-packed pressure-cooker bomb exploded Saturday night in New York’s Chelsea section, wounding 29 people, none seriously. An unexploded pressure-cooker bomb was found blocks away.

Late Sunday night, five explosive devices were discovered in a trash can at an Elizabeth train station. Investigators have not publicly tied Rahami to those devices.

Rahami provided investigators with a wealth of clues that led to his arrest just 50 hours after the first explosion, including fingerprints and DNA at the scene of the Manhattan bombing and a clear surveillance-camera image of his face near the site of the blast, according to law enforcement officials.

Officials said they have no other suspects at large but cautioned they are still investigating.