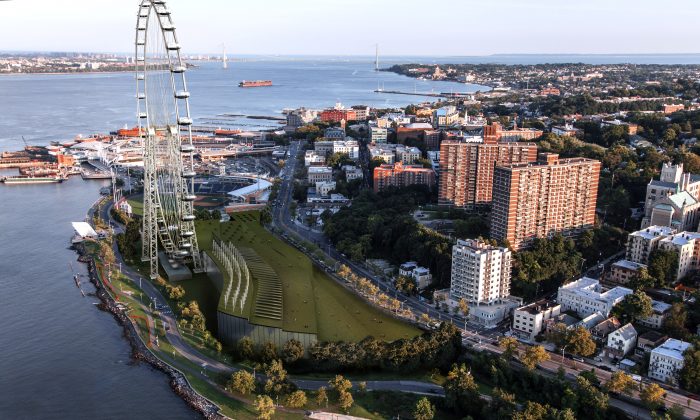 A rendering of the New York Wheel, billed as the world's largest Ferris wheel, along with a new retail complex and hotel on Staten Island, New York. (Courtesy of Mayor Michael Bloomberg’s Office)
New York

NEW YORK—A New York City community board has given its blessing to what’s billed as the world’s largest Ferris wheel.

The approval Tuesday has some strings attached.

The Staten Island Advance says it requires 100 percent of the city’s revenue from the lease to be used for improvements in that borough. Also, community board and borough president approval or disapproval is only conditional, which means if they vote against a project it can’t stop it. Typically city agencies seek to get their approval through compromises, though.

The proposed New York Wheel, sitting 625 feet tall, would have a view of the Statue of Liberty, New York Harbor and the Manhattan skyline.

The $500 million project in New York also includes an outlet mall and hotel.

The wheel would sit next to the St. George ferry terminal, which receives visitors from Lower Manhattan via a free ferry, which carries 2 million tourists annually. Staten Island is a borough of New York City, sitting across the river from Manhattan.

Developers also need approval from the borough president, the City Planning Commission, the City Council and the mayor.

Mayor Michael Bloomberg has already promoted the project, and the commission, which he selects, almost always votes in his favor.