NYC Auctioned Off Stockpiled Ventilators Meant for a Pandemic: Report 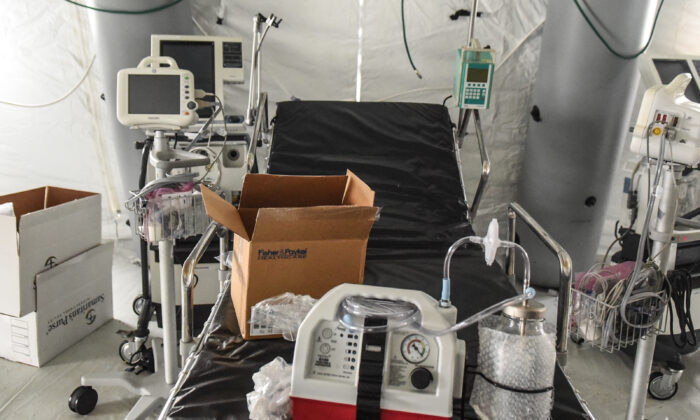 A ventilator and other hospital equipment is seen in an emergency field hospital to aid in the COVID-19 pandemic in Central Park in New York City on March 30, 2020. (Stephanie Keith/Getty Images)
By Isabel van Brugen

Hundreds of ventilators owned by New York City as part of its emergency stockpile were auctioned off at least five years ago under the administration of Mayor Bill de Blasio, according to reports.

The ventilators, and “a supply of facemasks,” were purchased by the city in 2006 under then-Mayor Michael Bloomberg as a measure to prepare New York City to handle a potential pandemic, akin to the CCP (Chinese Communist Party) virus pandemic.

However, the ventilators were later auctioned off because the health department “couldn’t afford to maintain them” when they broke down, according to an investigation by ProPublica.

At the time of the purchase, a new strain of flu had emerged in Asia, the news outlet reported, citing a 2006 report from the New York City Department of Health and Mental Hygiene. The report (pdf) stated that the city should have on hand thousands of additional ventilators to treat patients should a pandemic arise.

“Since the pandemic will be widespread in the United States, the supplies from the federal Strategic National Stockpile may not be available and local caches will need to be relied upon,” the report said.

New York City then acquired 500 ventilators but auctioned them off some time before 2016 because it couldn’t afford to maintain the machines—the model of which ceased production after 2009, according to the report.

New York City also planned to acquire 1.1 million N95 face masks for use in a pandemic. However, it ended up purchasing just 216,000 due to reduced funding. The department said the masks “eventually all expired” and it became “cost-prohibitive to replace them in any meaningful quantity.”

The news comes as the city struggles with a shortage of critical medical supplies for health care workers and first responders amid the CCP virus pandemic, which has resulted in deaths surpassing 4,000 in New York City alone as of press time, according to a tracking map by Johns Hopkins University that collates official government data.

New York state has become the America’s CCP virus epicenter, with a cumulative death toll of 5,489. The United States has recorded almost 400,000 infections; well over a third of those are in New York state alone.

On Sunday, Vice President Mike Pence announced that the states of Oregon and Washington have returned hundreds of ventilators to the Strategic National Stockpile for distribution to states that have been harder hit by the CCP virus.

“The state of Oregon and the state of Washington are leading by example,” Pence said. “Oregon sent 140 ventilators to New York City—they looked at their circumstances and concluded that they could spare those at the point of the need.”

The role of the Centers for Disease Control and Prevention’s Strategic National Stockpile is to supplement state and local supplies during public health emergencies.

Offering a glimmer of “good news,” De Blasio on Tuesday said that the number of CCP virus patients requiring ventilators has “improved in recent days.”

“The good news is it’s giving us some more time,” the mayor told reporters during a press briefing at the PS 1 Alfred E. Smith school in Chinatown. “It’s giving us the opportunity to get more ventilators in.”

The mayor said that roughly 830 COVID-19 patients were intubated across the ‘Health + Hospitals’ system, making up 20 percent of the city’s health care capacity.

“I am hopeful, but I’m not drawing conclusions until I am 100 percent sure,” de Blasio added, urging that residents to comply with stay-at-home orders and to continue practising social distancing to curb transmission of the virus.

“I want to make sure no one stops social distancing and shelter-in-place,” the mayor said.